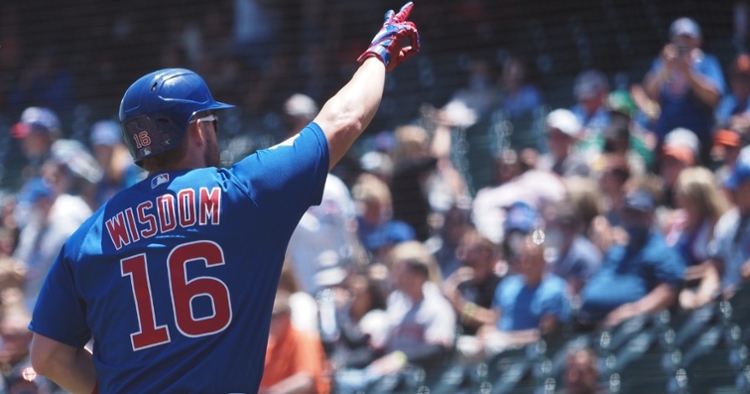 SAN FRANCISCO — Setting a new franchise record for home runs hit in a player's first eight starts with the Chicago Cubs (33-26), Patrick Wisdom powered out his fifth and sixth home runs of the week and helped the North Siders end their three-game losing streak. The Cubs wrapped up a four-game series at Oracle Park with a 4-3 victory on Sunday, preventing the Giants from pulling off a sweep. Kyle Hendricks overcame a rough start to his outing and went on to earn the winning decision.

Johnny Cueto started on the bump for the Giants and gave up a two-out double to Ian Happ in the top of the first before forcing Javy Baez to ground out. LaMonte Wade Jr. led off the bottom of the first with a solo shot that barely cleared the wall in left. Buster Posey then singled, and, following a walk drawn by Steven Duggar with two away, Donovan Solano drove home Posey with an RBI base knock. Wisdom put the Cubs on the board in the second via his first dinger of the day, a 412-footer swatted out to straightaway center.

Mauricio Dubon led off the home half of the second with a double and eventually scored from third on a two-out RBI double by Posey. Alex Dickerson singled after that, leading to Posey getting gunned down at home by a throw from Happ in center. Duggar belted a double off the wall in right-center with one out in the third but was left stranded. Cueto walked Happ to begin the fourth, and Wisdom went on to score Happ with a two-out blast. The 422-foot two-run shot once again carried over the wall in straightaway center.

Hendricks came through at the plate in the fifth with a leadoff double, his first extra-base hit of the season. Anthony Rizzo then reached on a single, which moved Hendricks to third, and, a few plate appearances later, Happ walked to load the bases with one out. Baez hit a dribbler to Dubon at shortstop, and Dubon threw home in an attempt at outing Hendricks. However, Posey was unable to corral the low throw and was charged with a catching error. After Hendricks scored the go-ahead run, Conner Menez relieved Cueto and struck the next two batters out, leaving the bases loaded.

The Giants were retired in order in the fifth, with Hendricks even throwing a quick pitch as he breezed through the frame. Eric Sogard dove across first base in an effort at recording an infield hit in the sixth but missed the bag entirely, resulting in a groundout. Baez grounded out to end the top of the seventh and injured his right thumb in the process. Thereafter, Sergio Alcantara replaced Baez in the lineup. After Wade drew a one-out walk in the bottom of the seventh, Tepera came on to pitch and gave up a single to Posey before drawing two consecutive flyouts to maintain the Cubs' lead.

Andrew Chafin tossed a scoreless eighth, and Sogard helped his cause by fielding a hard-hit burner hit up the middle by Solano and teaming up with Rizzo at first for a 4-3 double play. After Chafin fell down in his failed attempt at gloving the ball, Sogard snagged the grounder, jumped off second base and fired a throw over to Rizzo. Austin Slater, who hit a leadoff single prior to that, was outed at second. A separate defensive feat bailed out Craig Kimbrel in the ninth, as Bryant made a leaping grab at the wall in left, robbing Dubon of what could have potentially been a leadoff homer. After Dubon hit the very first pitch of his appearance to deep left, Kimbrel struck the next two batters out, finishing off the Cubs' 4-3 win.