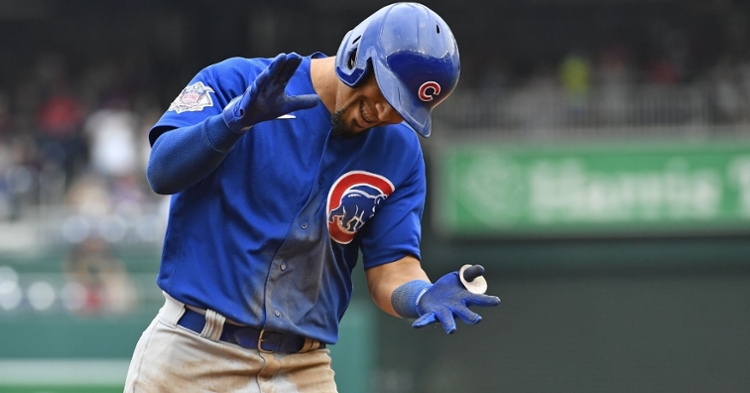 WASHINGTON — Rafael Ortega may have stolen the show at Nationals Park on Sunday afternoon, but Yadiel Hernandez won the game with a walkoff home run in the bottom of the ninth. With his first career multi-homer performance, Ortega tied a Chicago Cubs (51-56) franchise record by going yard three times in one game. He finished the contest 4-for-4 at the plate, driving in all five of the Cubs' runs. However, Hernandez skied two homers for the Washington Nationals (49-56), including a leadoff jack that ended the ballgame and wrapped up a 6-5 Nationals win.

Ortega opened the game with a bang by clubbing a dinger out to right-center in the very first plate appearance, with Erick Fedde giving it up. A brief rain delay held up the action between the first and second innings. Jason Heyward drew a walk and stole second in a scoreless top half of the second. Ortega singled and was caught stealing second in the ensuing inning, as former Cubs catcher Rene Rivera gunned him down.

Adbert Alzolay struggled with two outs in the third, giving up back-to-back RBI singles Josh Bell and Hernandez. Bell drove home Rivera and Juan Soto, who had just been intentionally walked, and Hernandez pushed Bell across. Alzolay then threw a wild pitch and issued a walk before stopping the bleeding with a strikeout. Rivera was hit by a pitch in the fourth, and consecutive walks loaded the bases with two away. Bell then plated Rivera with a base knock, but Hernandez grounded into an inning-ending fielder's choice thereafter.

Here's a video of Juan Soto scoring from first on a Josh Bell single because he's elite at everything.@JuanSoto25_ // #NATITUDE pic.twitter.com/2ENK8deejU

With one out and runners on the corners, Alzolay forced Rivera to ground into a double play to end the fifth. Andrew Romine swatted a leadoff single in the sixth that served as the Cubs' only hit of the contest by someone other than Ortega. Ortega followed up Romine's base hit with a towering two-run long ball to right off Fedde. Adam Morgan pitched a 1-2-3 bottom of the sixth, and Gabe Klobosits retired the side in order in the top of the seventh.

Hernandez walloped his first round-tripper of the day with a solo shot to left off Kyle Ryan in the seventh. Dan Winkler relieved Ryan with two outs and issued a pair of walks before escaping the inning via a strikeout. Willson Contreras pinch hit with one out in the eighth and was walked by Wander Suero. Ortega proceeded to smash his third tater of the affair, sending a game-tying two-run bomb out to right.

Yadiel Hernández is hitting .526 with 8 RBI since the All-Star Break.

Contreras took over left field in the home half of the eighth, which saw Codi Heuer work around a leadoff single by Gerardo Parra, who was then moved to second via a sacrifice bunt. Soto was then intentionally walked before Bell grounded into an inning-ending double play. Patrick Wisdom went 0-for-3 on the day, putting a stop to his six-game hitting streak, but he drew catcher's interference to lead off the ninth. However, Matt Duffy grounded into a double play after that, and Heyward then popped out, giving Kyle Finnegan a scoreless inning pitched.

Just two days removed from making his MLB debut, Manuel Rodriguez toed the slab for the Cubs in the bottom of the ninth and faced only one batter, as Hernandez, who went 4-for-5 at the dish, hammered a walkoff homer over the wall in left. The leadoff blast provided the Nats with a 6-5 victory over the North Siders. While the Nationals took 2-of-3 in this particular series, the Cubs won the seven-game season series 4-3.

We held the Cubs to 5 hits today.