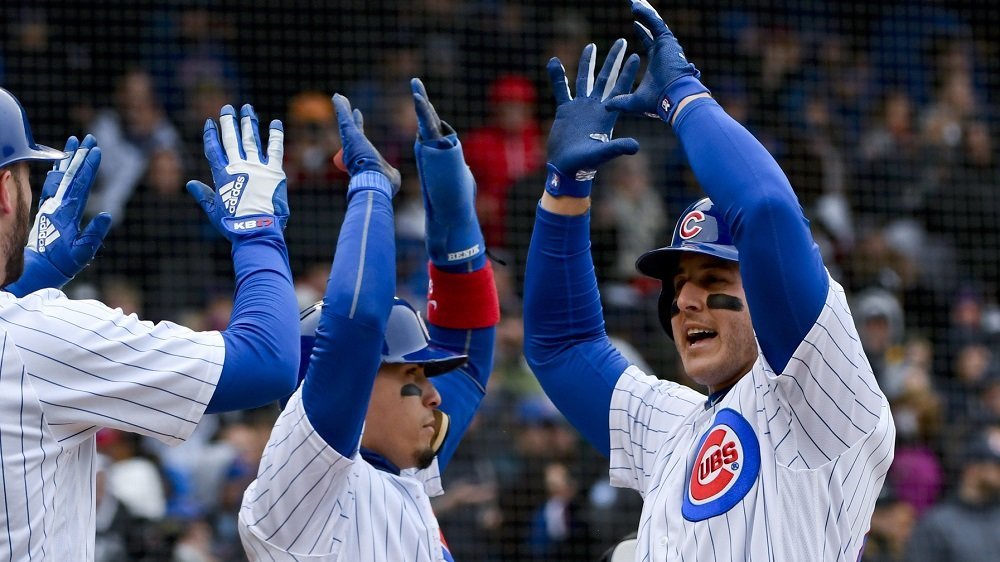 Making the most of their nine hits and eight walks on the day, the Cubs put four runs on the scoreboard in the first inning, benefiting, perhaps, from the two-hour rain delay that preceded the game. White Sox starting pitcher James Shields produced a decent start on Saturday, save the opening frame, and was arguably hindered by the disruption of his gameday routine caused by the rain delay, which was not announced until less than a half-hour prior to the orginally scheduled start time.

Shields pitches six innings of ball, in which he gave up five runs on seven hits and four walks. It is worth noting, however, that four of those hits and two of those walks came in the bottom of the first. Cubs infielder Javier Baez, who hit leadoff, smacked a triple into the right-field corner to open the action. Baez proved to be rather effective in the leadoff spot, going 2-4 with two runs on the day.

Following Baez's fourth triple of the season, Cubs third baseman Kris Bryant walked to put runners on first and second for the North Siders. It really did not matter what bases they occupied, though, as Rizzo enabled both of them to trot home with a three-run bomb thereafter. Coming on an outside fastball from Shields, the 380-footer just cleared the wall in left-center field to give the Cubs a 3-0 lead. Serving as Rizzo's sixth home run of 2018, the three-run blast also marked Rizzo's fifth home run of the month, as his hot start to May continued on Saturday.

The #Cubs have no problem striking early... this time it's Anthony Rizzo with an opposite field shot

Later in the inning, recent Cubs call-up David Bote tallied a hit, something that he has done in each of his three appearances since being called up at the beginning of the week. A two-out bloop single, Bote's first-inning hit scored Kyle Schwarber to give the Cubs a four-run edge. It took a little while for Shields to settle in, and his early woes cost him, as he was handed the loss to become 1-4 on the season.

While he incited the Cubs in game one of the Crosstown Classic, Contreras provided insurance runs for the Cubs in game two. Entering the series with a modest stat line of one home run and nine RBI for the entire season, Contreras accrued three home runs and 10 RBI in the past two games, dismantling the White Sox pitching staff.

Going 3-5 with thee RBI, Contreras made the score 5-0 in favor of the Cubs on a single to center in the second. Baez, who scored on the one-out hit by Contreras, started the inning with an infield single, in which he hustled to beat out a throw at first base.

Soon afterward, Baez stole second base on White Sox catcher Wellington Castillo, Baez's former teammate with the Cubs. Coming up clutch with a mid-dive swim move, Baez retracted his left hand to avoid a tag being applied by White Sox shortstop Tim Anderson and was instead able to successfully touch the bag with his right hand prior to being touched by Anderson's glove. Baez now boasts four steals on the year.

A walk of Rizzo ensued, bringing Contreras to the plate, where he came through with an RBI single. Contreras was not done, however, powering a 402-foot bomb into the seats behind center field as part of a three-run seventh inning for the Cubs. Taking White Sox reliever Chris Beck deep on a four-seam fastball, Contreras brought home Rizzo on the dinger, making it a two-run bomb that put the Cubs ahead 7-1.

Pitcher Jon Lester received the starting nod for the Cubs on the day, throwing 5.1 innings of one-run ball while striking out five and giving up four hits and three walks. Lester earned the win for his efforts, which was the first winning decision for Lester since late April. He now stands at 3-1 and has an earned run average of 2.66.

The lone run given up by Lester came in the top of the sixth, when White Sox first baseman Jose Abreu brought in center fielder Adam Engel on an RBI groundout. The White Sox added their other runs via a three-run homer off the bat of third baseman Matt Davidson in the eighth, which was given up by Cubs relief pitcher Carl Edwards, Jr.

Therefore, the three-run seventh came in handy for the Cubs, allowing them to win rather comfortably. In addition to Contreras's two run blast, outfielder Mark Zagunis, another recent call-up for the Cubs, drew a bases-loaded walk to force in a run for the North Siders that gave them an 8-1 advantage.

Then, in the ninth, Cubs middle reliever Mike Montgomery got caught in a jam early on, getting pulled in favor of closer Brandon Morrow because of it. A rare error suffered by Bryant did not help Montgomery, as it put runners on second and third with no outs. Entering with one out but men still on second and third, Morrow eventually forced Abreu into a game-ending groundout with the bases loaded to secure the 8-4 Cubs (21-15) win over the White Sox (9-27).

Barely outhitting the White Sox 9-8, the Cubs performed well with runners in scoring position, taking advantage of the vast majority of their auspicious opportunities on the offensive end. That consistency with the bats has been a constant fixture of the Cubs' recent winning streak, which now stands at five games. The North Siders will aim to collect a third straight victory over the rival South Siders at Wrigley Field tomorrow afternoon, which would also lock up their second consecutive three-game sweep.