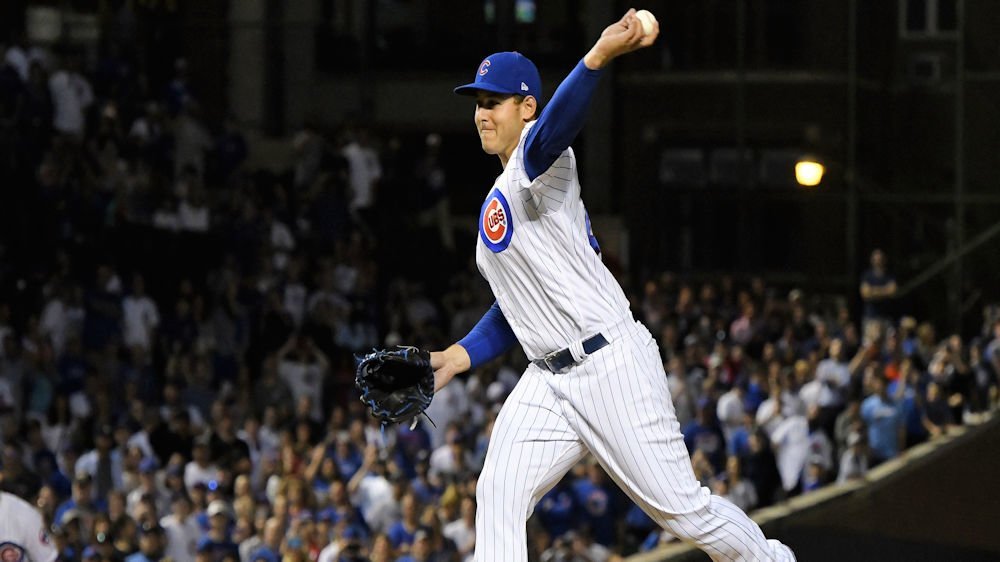 CHICAGO — After a grueling series against the St. Louis Cardinals last week, the Chicago Cubs suffered an understandable letdown with youngster Luke Farrell on the mound against the Arizona Diamondbacks on Monday. Making his second spot start of the season in order to provide to provide the Cubs' regular starters with an extra day of rest after a series that featured five games in four straight days, Farrell gave up five runs in the opening inning. The Cubs never recovered from the early deficit, going on to lose 7-1 at Wrigley Field.

The first inning proved to be an all-around awful experience for Farrell. After hitting Diamondbacks leadoff batter and former Cub Jon Jay, Farrell saw his struggles escalate from there. Not helping matters was a close call that Farrell was forced to deal with on a lined comebacker off the bat of A.J. Pollock with runners on first and second. Barely missing Farrell's face and instead hitting the wrist of his glove hand, the liner ricocheted off Farrell and into the outfield for an RBI single.

Luke Farrell does his best Neo impression from The Matrix to avoid this screamer back up the middle! Diamondbacks score their first of the inning pic.twitter.com/RGZu7sYvnd

The Diamondbacks then went up 2-0 on a sacrifice fly from Jake Lamb, and, following a wild pitch, Pollock was brought home on a single from Ketel Marte. To round out the inning, Jeff Mathis plated two runs on a double to left that placed Chicago into a five-run hole. The contest proved to be a game of comebackers with no comeback, as Cubs reliever Brian Duensing also dealt with a close call on a comebacker during the course of the game. Fortunately for Duensing, he reacted quickly enough on the liner to catch it for an out.

Arizona added another run off Farrell in the second frame, as star slugger Paul Goldschmidt tagged him for a solo home run. Farrell departed after pitching 3.1 innings, in which he was charged with six runs on six hits, two walks and one hit by pitch. He received the loss to drop to 3-4 on the year. Diamondbacks starter Patrick Corbin, meanwhile, dominated in his seven innings on the bump. He allowed just one run to score on six hits while striking out nine and walking zero. Corbin was credited with the win, making him 7-4 overall.

Although the six-run difference might indicate otherwise, Chicago was not particularly worse than Arizona on offense, as the Cubs tallied just two fewer hits than the Diamondbacks. However, the Cubs were unable to muster much run production. Second baseman Javier Baez, who was honored with his own bobblehead at the game, was the lone Cub to garner multiple hits. Baez went 2-4 with one strikeout at the dish.

The lone run of the contest for the North Siders occurred in the sixth, when first baseman Anthony Rizzo drove home outfielder Ian Happ on a fielder's choice groundout for Rizzo's 65th RBI. That statistic paled in comparison to the ones that Rizzo attained later in the contest, though, as he accrued a career ERA and WHIP of 0.00 by going one up, one down in his big-league pitching debut.

After not using multiple position players as pitchers in a game since 1884, the Cubs did it twice in a span of four days. The first instance came in last week's lopsided 18-5 loss that the Cubs suffered versus the Cardinals, and the second came against Arizona on Monday. Catcher Victor Caratini recorded the first two outs of the ninth before Cubs skipper Joe Maddon opted to let Rizzo give pitching a shot. Taking just two pitches to force an inning-ending flyout, Rizzo utilized two slow, yet effective, sliders to get the job done.

VIDEO: @Cubs superstar 1B @ARizzo44 comes into pitch in the 9th inning, down 7-1 at #WrigleyField. He throws two pitches and gets out of the inning unscathed. Is he the greatest reliever of all time? #GoCubsGo #FunIsGood pic.twitter.com/hG4TceeRYp

Failing to catch up after falling down by a handful of runs at the start, Chicago dropped the opener of a four-game set with Arizona. Winning 7-1, the Diamondbacks, who scored their seventh run on an RBI single from Nick Ahmed in the eighth, improved to 55-46 while dropping the Cubs to 58-41.