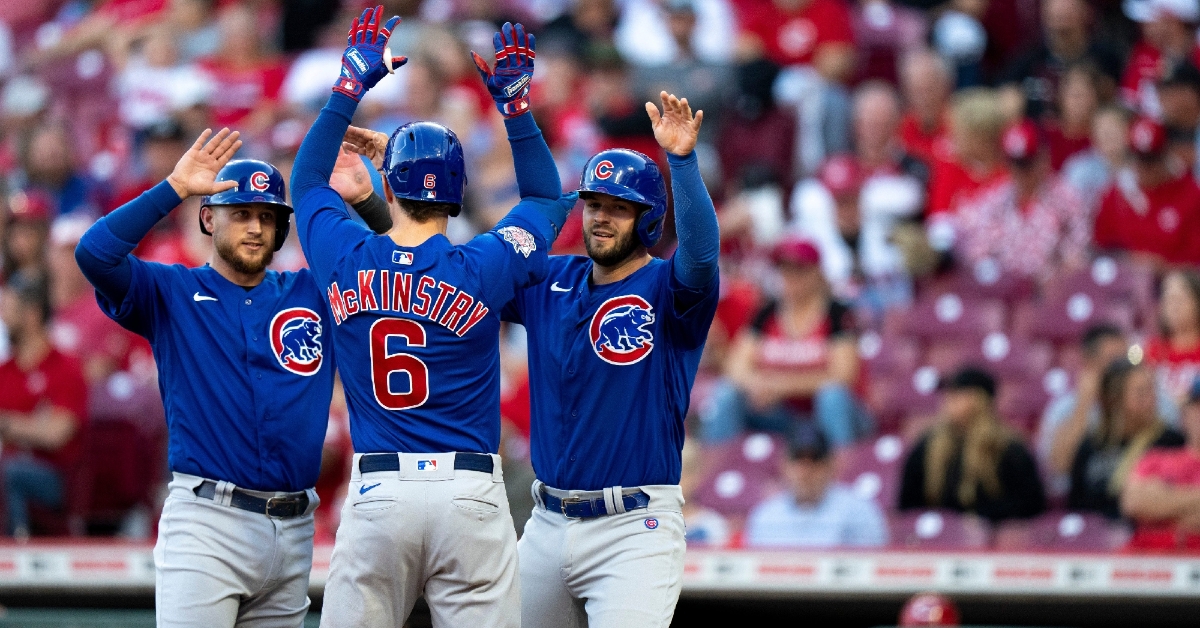 CINCINNATI - Wednesday marked the end of the MLB regular season with the playoffs set to begin on Friday. That means there will be 18 teams beginning their offseason preparations as soon as Thursday and the Chicago Cubs (74-88) are one of those 18 teams.

Record aside, there was a lot to like about this team this season, and look no further than their 38-32 second half that saw them play some great baseball for nearly three months. Adding some impressive rookies like Christopher Morel and Seiya Suzuki, mixed with a young influx of pitching that led the team to the third-best ERA in baseball post-all-star break, and the future is looking bright for the Northsiders.

Before the Cubs could head into the offseason, they had one more game to play at the Great American Ballpark as they were looking to finish the season strong against the Cincinnati Reds (62-100). After falling on a walk-off on Tuesday, the Cubs came out on a mission on Wednesday and made quick work of the Reds 15-2.

You can talk about the pitching all you want, but you can't talk about it without mentioning Adrian Sampson. Coming off a September where he posted a 1.50 ERA, good for fifth in the majors, his only October start didn't go as planned as he allowed two runs (1ER) in just 2 2/3. That was because he left the game with an injury, but still finished the season with a 3.11 ERA and gives the Cubs another arm to think about heading into the 2023 season.

Although Sampson didn't last long, he didn't need to as the Cubs offense jumped all over Reds rookie Graham Ashcraft for the second time in a week. Ashcraft was much better this time, but things began to come unglued late as he was charged with seven runs in 5 1/3.

From an offensive standpoint, anytime you score 15 runs, you know you are getting production from a lot of people. Even more remarkable is that all 15 runs came across in just four innings as the Cubs made sure to put up runs in a hurry. With just one swing, David Bote put the Cubs in front for good as his three-run shot in the second gave the Cubs a 3-0 lead.

Despite being down on the scoreboard, you have to give the Reds some credit for battling back, as they were not going to let the Cubs get too far ahead. Jose Barrero worked a one-out walk ahead of the Austin Romine single in the bottom of the second, with PJ Higgins falling victim to a passed ball that allowed the Reds first run to come home.

The third inning was the same story for the Reds as Stuart Fairchild picked up a two-out triple ahead of a Spencer Steer single that made things 3-2. To make matters worse, that was the final pitch Sampson would throw as he left after that single with an injury and gave way to Adbert Alzolay in relief.

Since working his way back from a LAT injury that nearly cost him the entire season, Alzolay has shown glimpses of a valuable bullpen piece for next season. Across his 2 1/3 innings on Wednesday, the right-hander kept the Reds off the board and struck out three to finish the season with a 3.38 ERA.

Still holding the 3-2 lead in the sixth, the Cubs offense started to tee off on Ashcraft and the entire Reds pitching staff, scoring 12 runs over the next three innings. Six of those runs came in the sixth as a one-run game turned into a seven-run lead in the blink of an eye.

Higgins opened up the scoring in that inning with a bases-loaded walk, while Bote added an RBI double to make things 6-2. For Bote, this was his best game of the season as he finished with a team-high five RBIs, two off his career high. The big hit in the sixth came from Zach McKinstry as his three-run blast put the Cubs in front 9-2 and set the tone for what was a sign of things to come.

An easy 1,2,3 inning from Mark Leiter Jr in the seventh brought the Cubs offense back to bat in the seventh as they were looking to keep the momentum rolling. As if the six runs were not good enough, why not add four more in the seventh as Franmil Reyes and Morel picked up RBI singles in that inning mixed with a Higgins double to extend the lead to 13-2.

Cincinnati had an opportunity to get closer in the bottom of the seventh as Michael Rucker ran into some big-time trouble. What started with a leadoff single to Fraley quickly turned into a bases-loaded one-out situation as Rucker walked two of the next three he faced. After recording a massive strikeout, Rucker induced an inning-ending pop-up, and the Cubs maintained their 13-2 lead.

With Reyes picking up an RBI single in the seventh, the big man capped off his solid game with a two-run homer in the eighth to extend the Cubs lead to 15-2. That homer ended a long homerless drought for the Cubs DH, and he will now head into the offseason with hopes of being on this team next year. Rowan Wick and Brandon Hughes came in to retire the final six batters of the game as the Cubs end 2022 on a high note and can now focus on 2023.