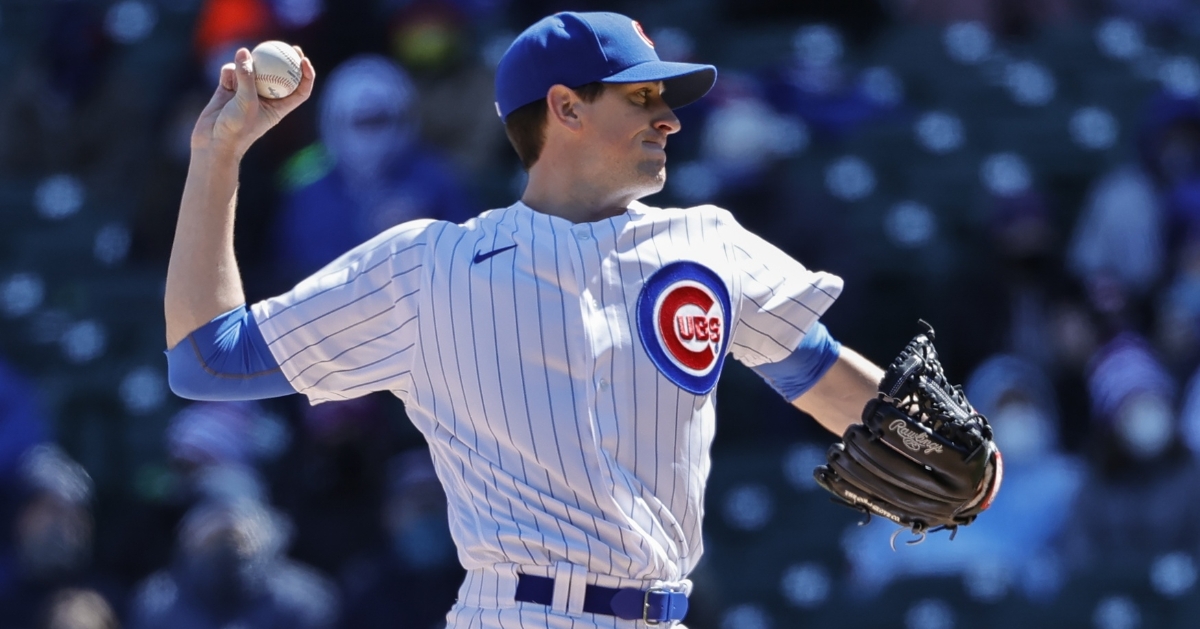 The Cubs are coming off their first sweep of the young season and have climbed back to .500 on the year.

To cap off a so-far solid homestand, the Cubs will be welcoming the Milwaukee Brewers to Wrigley Field a second time this season as this will be the third series of the year between the two sides. The first-place Brewers are 11-7 and the season and have taken both series from the Cubs in 2021.

A big reason for that has been their starting pitching which has been lights out this year. Not only do they have four starters posting ERA's under 3.00, but they have Corbin Burns, who has 0BB and 40K through four starts this season while posting a 0.43 ERA. Fortunately, the Cubs are dodging that bullet by not seeing him, but they will see the same three from their first series this year and hope for better luck this time around.

Anderson has gotten off to a great start winning his last two decisions on the mound. His lone loss this season came against the Cubs in the first meeting of the season. He was perfect in that start through three innings before getting hammered in the fourth, allowing three home runs and four runs to score in that losing effort.

Since then, Anderson has been tough, and that has really been the only inning he has run into trouble with this entire season which spans now 17 innings. Anderson is the one starter in the Brewers rotation who doesn't throw hard and relies on his team to make plays behind him as he pitches to contact. The Cubs have had a fair amount of success against him in limited at-bats and will look for that to continue again.

Hoping to solve whatever is wrong with him this season is Hendricks, who hasn't looked good in 2021. His 6.92 ERA is the worst ERA he has posted in the month of April and follows a spring in which he posted a 6.36 ERA. Hendricks labored through four innings in his last outing, allowing seven runs on seven hits, including a career-worst four homers.

Ironically, all four of those homers came in the first inning where Atlanta scored six runs, so he was able to settle in nicely after that. Command has been an issue all season for Hendricks as he has walked one less batter in four starts this season than he did all 2020. His best start of the season came against this Brewer team, where he threw six shutout innings in a no-decision.

Today, Cubs Kyle Hendricks becomes 19th consecutive RHP to start against #Brewers at outset of season. That number will grow to 20 and 21 before series is done because Chicago has no LH starters.

Fastball Freddie would love to face the Cubs every start as both of his win's game against them. Peralta has been incredible in two outings, allowing just one run in 11 innings this season to go with six walks and 19 punchouts.

For the season, Peralta has punched out 42.5% of the batters he has faced, which lands him in the top five in the national league. For the Cubs to have success against him, they need to capitalize on him early as his command is typically at its worst in the first two innings. Willson Contreras will be looking to keep his excellent track record going off Peralta, as will Nico Hoerner.

Returning to the Cubs after being sent to South Bend is Alzolay, who will be making his third start of the season against Milwaukee. This has been the only team he has faced this year, and despite going 0-2 in those starts, he was much better last time out. After holding the Brewers scoreless through five innings, Alzolay ran into some trouble in the sixth inning and was eventually pulled with the bases loaded and one out. A Luis Urias RBI double a few pitches later cleared the bases as Alzolay was charged with three runs in 5 1/3.

It is all about adjustments for Alzolay, and he certainly made a lot of adjustments from his first start walking one and striking out six last time out. The Cubs will need a bit more length out of him at some point, and if he can avoid the big inning, he should be fine.

Adbert Alzolay is scheduled to start Saturday for the #Cubs, per @MLBastian. ???? pic.twitter.com/ZzueLsokYE

Another pitcher seeing the Cubs for a third time this season is ace Brandon Woodruff. Not only will this be his third start against them, but this one could be interesting after the Cubs intentionally threw at him in his last appearance.

Although he only has one win to his name this season, Woodruff has pitched well all season, including both his outings against the Cubs. In his previous outing at Wrigley, Woodruff needed just 68 pitches to get through six innings before being taken out after seven. Joc Pederson would hit a solo homer off Devin Williams in the eighth, taking a win away, but the Brewers still won the game anyway.

Arrieta continues to impress this season and has been the Cubs best starter through four starts. He will be looking for a bounce-back performance against this Brewers team as they handed him a loss in their last meeting. Command has been an issue at times this season as he has gone more to his changeup in recent starts.

In his last start against Milwaukee, Arrieta lasted five innings allowing three earned runs to go with one walk and five strikeouts. Given his career track record at Wrigley, Arrieta will need to be on top of his game once again as he will be facing a tough customer.

Jake Arrieta has allowed 3 ER or less in 16 of 18 April starts with the @Cubs.#CubTogether pic.twitter.com/pY0MOtCCGI

The Cubs are finally starting to show signs of life at the plate, and it couldn't have come at a better time. Not only are they scoring runs with more consistency, but they are doing it without the long ball and relying more on a small ball approach. That will be crucial against this Brewers staff who has carved them up this season.

They always say the third time is a charm, and facing two of the three starters for the third time, maybe that will be the case. The Cubs are due against Milwaukee and are due to have a breakout game at some point against them. I am picking the Cubs to win the series 2-1 and cap off a solid 6-3 homestand before hitting the road.