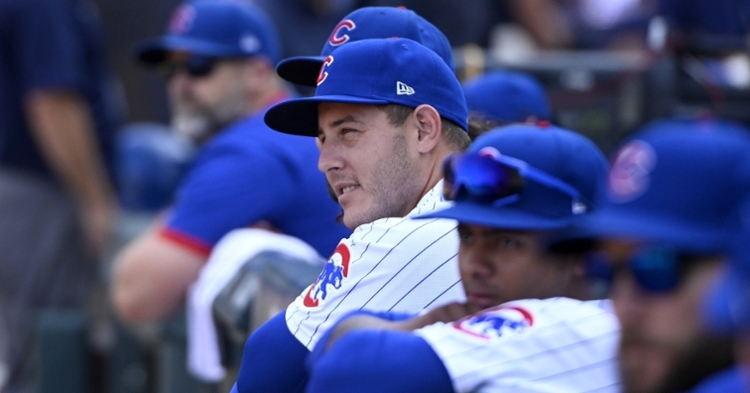 Thursday was a tough day for Cubs fans to swallow for a variety of reasons. Obviously, the loss to the Reds didn't help as the Cubs dropped another series and seven of the last eight against Cincinnati, but it was the trades that put a damper on the day as two more players were dealt to new homes.

With Alec Mills on the mound looking to keep his strong run of good starts going, Mills would have his work cut out for him as he allowed a first-inning homer to Joey Votto, putting the Reds up 2-0. It was Votto's sixth homer in this series and eighth in his last six games as he set a franchise record by homering in his sixth straight game.

The Reds turned to Luis Castillo on the mound, who, despite a rough season, has been impressive for a while. His 1.71 ERA since June 3rd not only leads the NL, but leads all major league baseball as he is slowly starting to look like the all-star he was a few years ago. For the most part, the Cubs have fared ok against Castillo this season, even if the wins haven't shown.

After being held scoreless through three innings, the Cubs finally started to sit on his off-speed pitches with Patrick Wisdom going deep in the fourth, followed by Willson Contreras's long ball in the fifth to give the Cubs a 3-2 advantage. However, their lead was brief as a costly error by Wisdom in the top of the sixth opened the door for Tucker Barnhardt to pick up an RBI single, giving the Reds a 4-3 lead. That was all for Mills, as he gave the Cubs six innings despite not striking out a single hitter.

With Castillo now out of the game in the seventh following his six strong innings, the Cubs were hoping to get to a Reds bullpen that has been terrible this season. Instead, the Reds improved their pen over the last several days with their newest acquisition Mychal Givens striking out the side in his debut. A Farmer double off Trevor Megill coupled with an Aristides Aquino sacrifice fly gave the Reds a 7-3 lead and all the cushion they needed as the Ian Happ homer in the ninth wasn't enough in a 7-4 defeat.

An end of an era

Everyone knew for the better part of three weeks that the Cubs would be sellers at the deadline. It became a matter of who would get dealt and when. While the Cubs were mainly quiet until yesterday, the team did make two significant moves that could help this team. Ryan Tepera was traded to the Southside in exchange for left-hander Bailey Horn, but that wasn't the major move of the day.

During the middle of the game against the Reds, it was revealed that the Yankees and Cubs were working on a deal to send Anthony Rizzo to New York in exchange for prospects. Later, that deal became official as Rizzo is off to the Bronx with right-hander Alexander Vizcaino and outfielder Kevin Alcantara coming to Chicago.

Both of those players are expected to land in the top 10 on the Cubs prospect list, but the loss of Rizzo was certainly a crushing blow to the fans and the franchise. Rizzo has been part of this organization for the last decade and was one of the first pieces acquired when Theo Epstein wanted to turn this thing around.

Over his time with the Cubs, he emerged as a Platinum glover at first while possessing consistent power as he is sixth all-time on the Cubs home run list and second among left-handers only behind Billy Williams. Rizzo is beloved in the community and has made a lasting impact that will never be forgotten.

To make matters worse, it doesn't appear as if the two sides will talk this offseason about a possible reunion, so this will be the last memories the fans have of him. All that matters is Rizzo is getting a chance to land a big contract somewhere and is leaving Chicago a much better place than he found it.

Willson Contreras for the lead

Not only did Contreras give the Cubs the lead with his 17th homer of the season, but he is now third on the team behind only Kris Bryant and Javy Baez. What most may not know is that his 17 homers also lead National League catchers as he continues to prove he is one of the best offensive catchers in the game.

While his average is still hovering around a .240, Contreras continues to be a force at the plate even if the results are not always there. He is a threat to go deep every time he steps into the box, and with Rizzo and possibly Bryant and Baez gone, he will be looked at as the guy going forward.

Under contract for at least one more season, the Cubs would be wise to talk extension talks with him sooner rather than later as they need to avoid what happened with this previous core. Contreras is a top-five catcher in this league, and the Cubs need to treat him as such before he gets frustrated with his contract situation and asks to be dealt somewhere else.

No one else on the Cubs has any.

Jake Jewell is impressive, Megill not

The Cubs have used plenty of bullpen arms this season, with a lot of them from AAA. While some have struggled, most of them have shown glimpses of success and were a big part of the Cubs having the best bullpen in baseball for a large chunk of the season.

Jewell was just another one of the pitchers to not only make their Cubs debut this season but to do it impressively as he struck out three hitters in 1 1/3 innings of work. Signed as a minor league free agent this season, Jewell was putting up good numbers at Iowa, where his ERA was a 2.92 to go with 13 walks and 35 strikeouts. His consistent performances finally earned him a call as he took the place of Tepera in the pen.

One pitcher who hasn't faired well at the big-league level this season is the big right-hander Megill. Armed with a 98-100 MPH, Megill impressed during spring training and was one of the last cuts from the roster before opening day. During his time in AAA, Megill has had some bumps along the way but has given the Cubs consistent outings where he has been striking out batters at an elite clip.

Now in his fourth stint with the Cubs this season, Megill is looking to find his way at the major league level, where his ERA is now over 17.00 following a rough outing on Thursday. He has the big fastball you look for out of the pen mixed with a breaking ball that could have closer potential in the future. That won't happen if his performances don't change, as he hasn't looked like the same pitcher he was during spring.