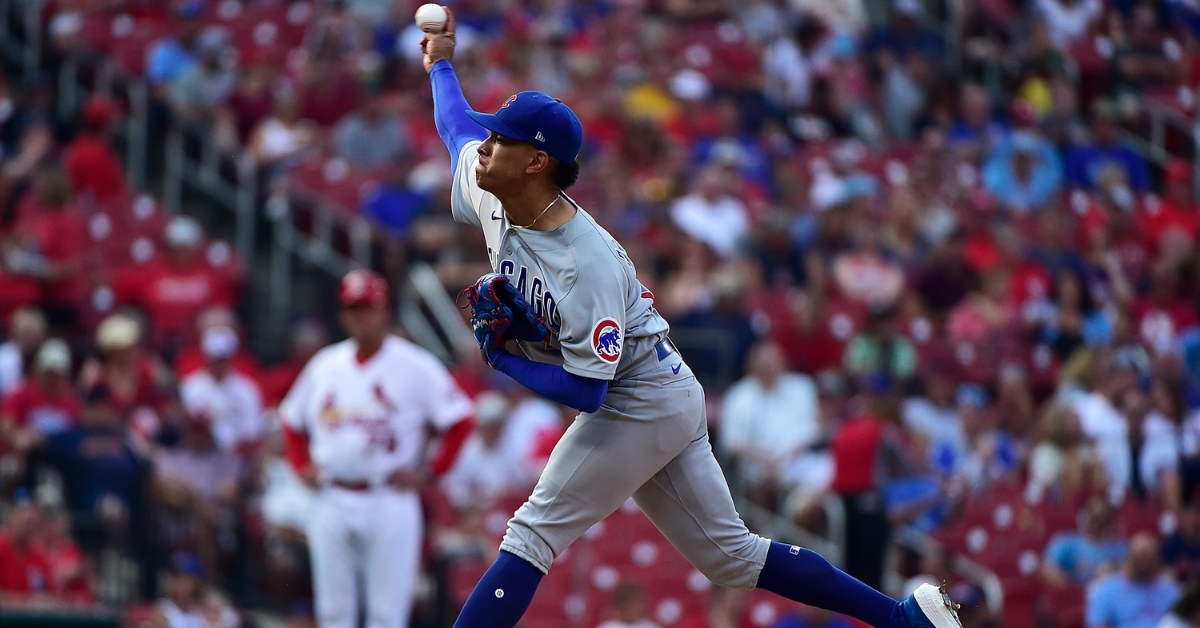 It's starting to become a broken record with Adbert Alzolay when he is on the mound. Give the Cubs a strong five or six innings, but at the same time allow two homers in the process. Even though those homers are solo shots or two-run shots most of the time, the Cubs haven't done a great job getting him run support as he fell to 4-10 after the Cubs 3-2 loss on Thursday.

Alzolay has an ERA of 4.59, but the Cubs are averaging 2.4 runs of support per start when he has the ball. That isn't going to win you many ball games. Ideally, the Cubs would love for the home runs to go down, but when you give your team six innings of three-run ball while striking out eight, the offense needs to do a better job supporting you.

Alzolay surrendered a leadoff homer to Dylan Carlson in the first before allowing a two-run Nolan Arenado shot in the third to put his team in an early 3-0 hole. That would be all he would allow as he not only settled in but did a great job recovering from that slow start. Unfortunately for the Cubs, Kwang Hyun Kim was slightly better as he matched Alzolay's six innings with six innings of his own, allowing two hits and seven punchouts. A Jake Marisnick RBI double in fourth was the only offense for the Cubs as they dropped three of four to

Chicago, you are on the clock

Now, all eyes continue to focus on the Chicago Cubs as they could ultimately dictate how the trade market goes this season. With Kris Bryant, Anthony Rizzo, Kris Bryant, and Craig Kimbrel all free agents at the end of the season, it is becoming more likely that some, if not all, these players will be dealt with in the coming week.

After reports circled that neither Rizzo nor Baez is receiving a ton of interest right now, Bryant and Kimbrel make the most sense as they will net the most significant return. The Cubs also have Ryan Tepera and Andrew Chafin in the pen, drawing interest for several teams.

At this point, the ball is in the Cubs court as they need to decide what type of package they want for each player. Once they figure that out, they can then put these players on the market, opening the trade doors. Until their price is named, the trade market could be quiet as many teams are waiting to see what the Cubs are asking for at this point. Hopefully, Jed Hoyer and the brain trust have a plan as they control the deadline market.

Cubs are happy to say goodbye to Carlson

While both the Cubs and Cardinals have been searching for consistent help from the leadoff position, the Cardinals may have found their man in Carlson. Not only did he have a leadoff homer last night, but a massive series altogether that included a four-RBI night earlier in the week.

Not only was Carlson driving in runs, but he was hitting what seemed like everything as he hit close to .500 for the series. That type of production is precisely what you look for in a leadoff hitter and something the Cubs could use. With seven games remaining with the Cardinals this season, the Cubs will see a lot of Carlson.

When you look at the season series between the two teams so far, you see the Cubs hold a 7-5 edge over the Red Birds. Typically, when Carlson gets on base, the Cardinals are winning games compared to when he is not getting on base. You want your leadoff hitter to get on base and set the table, and Carlson sure set the table against the Cubs.

Before the game on Thursday, Ross revealed that Matt Duffy was eligible to come off the IL after being sidelined for the past two months with a bad back. The Cubs chose to option Sergio Alcantara back to AAA, but called up Trevor Megill instead of Duffy.

With Bryant still on the mend with sore legs, could we see Duffy back on the team come Friday? It is starting to look that way, but Ross will have a tough decision to make if that is the case. Ideally, you would think that Duffy comes in and takes Megill's spot on the roster. That is fine, but where do you play Duffy is the decision that falls on Ross.

Before his injury, Duffy saw tons of time at third base and was putting together a great season. Given Patrick Wisdom and his production at third, I am not sure it would be wise to put Duffy there at this point. Ross knows what Duffy's at-bats mean for this lineup and how important he could be. Now he needs to figure out where to play him and how to utilize him.