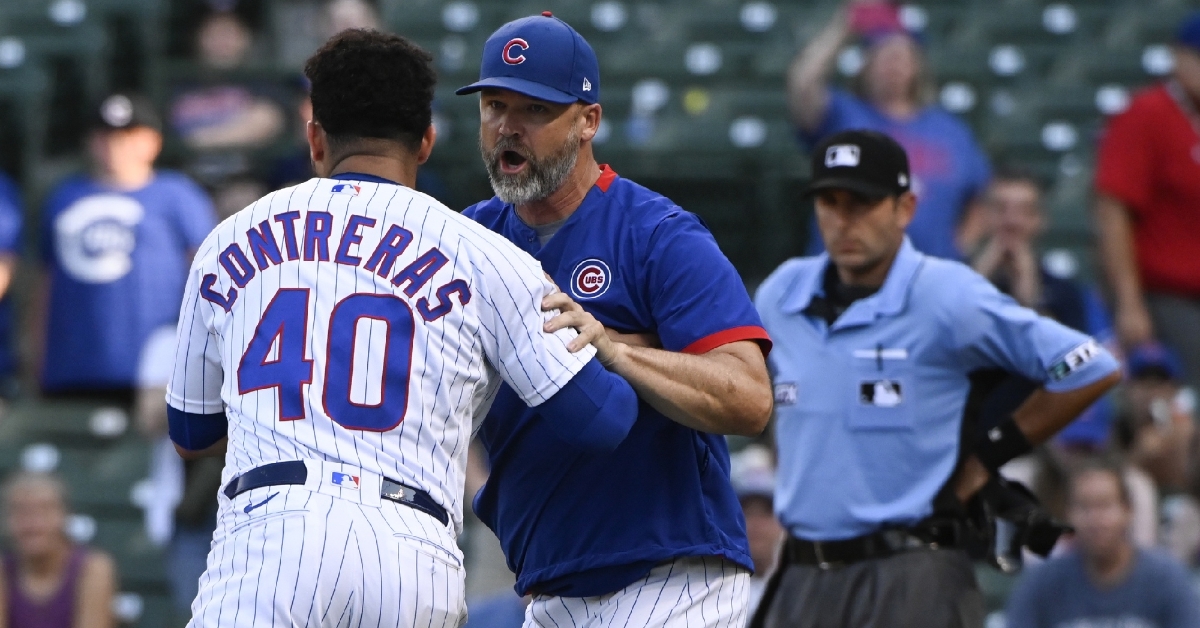 The Cubs certainly don't make things easy on themselves, do they? One day after knocking off the Diamondbacks 8-3, Arizona returned the favor on Saturday, knocking off the Cubs 7-3. For the second time in a week, the Cubs offense struggled to find the barrel against Merrill Kelly as he gave the Diamondbacks six impressive innings to move to 7-7 on the season. In two starts against the Cubs this year, Kelly has gone 15 innings and allowed a total of four runs.

Opposing him was Alec Mills, who continues to show he is better off as a starter than as a reliever. Since moving back into the rotation, Mills has posted a 3.56 ERA in 36 innings as opposed to a 6.91 ERA in 19 innings out of the pen. Mills continued to pitch well, once again giving the Cubs five solid innings in what was a no-decision for him.

Early on, the Cubs appeared to be on the verge of another win as the Javier Baez double play had the Cubs up 1-0 in the third before a Willson Contreras homer doubled that lead in the fourth. From that point on, it was all Arizona as they pushed across seven unanswered runs starting with the Daulton Varsho two-run shot in the fifth. Varsho then singled home the go-ahead run in a three-run seventh inning as the Diamondbacks were on top 3-2.

Freshly called up after Josh Rojas was placed on the IL, Asdrubal Cabrera came through with a clutch RBI double, providing the Diamondbacks with the game-winning hit and taking a 5-2 lead into the eighth. Andrew Young added a two-shot in the top of the ninth to deliver the knockout blow as the Cubs bats went silent in a 7-3 defeat.

The Varsho and Kelly Show

Through two games in this series, the Diamondbacks have scored 10 runs. Six of those runs have come off the bat of Varsho as he is having a great series. Not only that, but the catcher has connected for a pair of homers so far to go with a couple of non-homer RBI hits.

Not bad for someone who grew up a Cubs fan in the Chicago area. Playing at Wrigley Field was always a dream of his, and now he is living that dream dominating the team he grew up rooting for. On the other side of the ball was Kelly, who won his second start in as many tries against the Cubs this season.

As bad as things have been for Arizona this season, Kelly has been one of the lone bright spots in the rotation, and he has saved his best for the Cubs. In two starts against Chicago this season, Kelly has lasted 15 innings and has given up a total of four earned runs. He has also had excellent command where he has walked only three and struck out 15 hitters.

This is one pitcher the Cubs are happy they don't have to see anymore. On the flip side, Kelly would love to see this team far more often than twice a season.

A rare clunker for Andrew Chafin

Take away a couple of rough outings in April, and Andrew Chafin has been on quite a role in the Cubs pen. If it weren't for Craig Kimbrel leading the MLB in ERA, Chafin would be talked about a lot more as he entered Saturday's game with an impressive 1.48 ERA in his own right. Not only that, but he was also approaching 30 innings without allowing a run which is a streak dating back to May 8.

Going up against the team that traded him to the Cubs last season saw Chafin deliver a rare clunker. Some might even say it was his worst outing of the season as his ERA rose to 2.06 following a three-run inning. Chafin has been suspect to a rough outing or two from time to time, but that hasn't been the case this season for the better part of the last two months.

With the trade deadline a week away, Chafin will be a hot commodity for many teams. Not only is he a lefty, but a lefty pitching at an all-star level right now and someone who can fill different roles in the pen. Hopefully, he can bounce back the next time he is on the mound because the Cubs are at their best when he is.

Are we going to see a Matt Duffy/Patrick Wisdom platoon

With Joc Pederson now in Atlanta, it appears that Kris Bryant will be handling the left field duties for the rest of the season. That leaves a hole at third base that Ross needs to fill. Early in the season, Duffy got the bulk of the playing time at the hot corner as the Cubs offense was at their best winning games.

Once he went on the IL with a bad back, the Cubs needed to make a few changes, and bringing up Wisdom was one of them. All he has done in his time with the Cubs is play strong defense at the hot corner while leading NL rookies in home runs. Sure, there is a lot of swing and miss in his game, and he is going through a mini-slump, but that is all part of learning.

With Duffy back in the equation, some are wondering what that means for Wisdom going forward. After all, Wisdom's bat is a crucial part of this offense and needs to be in the lineup. However, so does Duffy's, as this team was at their best when he was playing.

Given the situation the Cubs are in, look for Ross to use both Wisdom and Duffy equally down the stretch in more of a platoon role. This wouldn't be a typical righty vs. lefty platoon, but more so starting each one of them every other day. That way, they can continue to get at-bats frequently while also giving the offense the best chance to win. Eventually, you would think someone wins more playing time down the stretch.