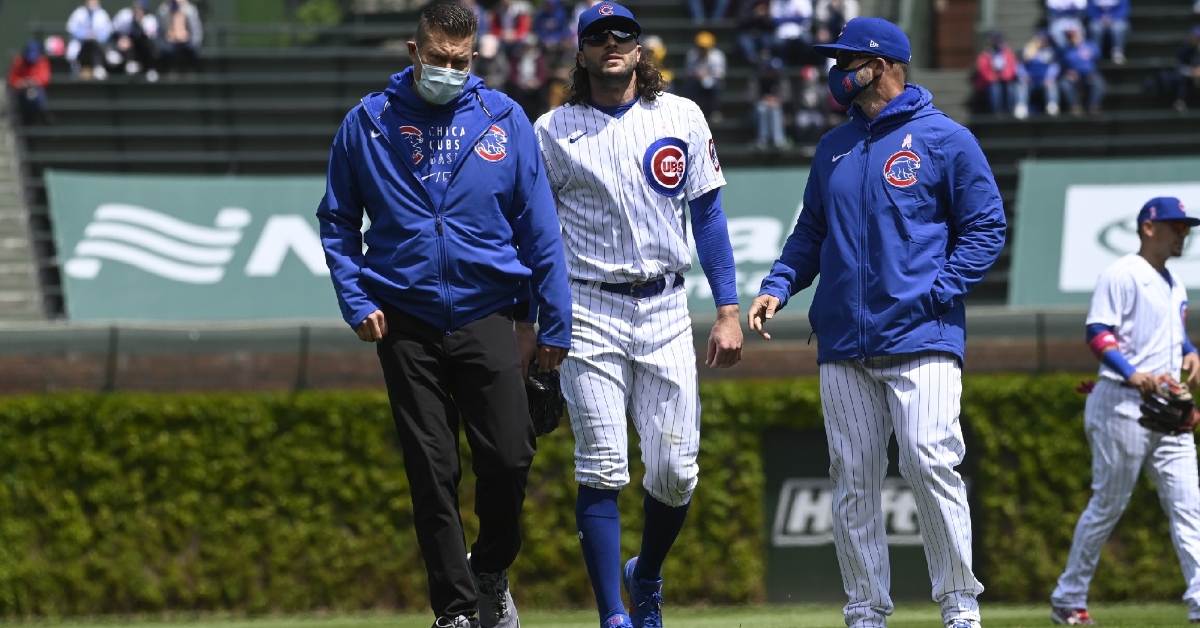 Looking to cap off a second straight sweep and a perfect homestand, the Cubs sent Kyle Hendricks to the mound coming off his best start of the season. Opposing him was Pirates lefty Tyler Anderson who has fared well against the Cubs this season.

While Anderson continued to do his thing against Chicago, lasting a season-high eight innings and allowing just two runs on four hits, it was Hendricks who struggled again as he continues to search for his way on the mound. Say what you want about his line as he allowed six runs in five innings, four of them earned off nine hits with three strikeouts, but the line doesn't tell the story.

If you didn't watch the game, you would think that his start was a rough outing. It may seem that way, but there were many things to like about Hendricks' start. His pitches were moving all over the zone, he wasn't giving up hard contact, and seven of his nine hits had exit velocities under 80 MPH, meaning the Pirates were finding grass where the fielders weren't.

A first-inning Jacob Stallings ground out got the Pirates on the board before a Wilmer Difo single extended the lead to 3-0. Difo would later score on an error as the Cubs were down 4-0 after half an inning of play. After initially getting the day off, Joc Pederson entered the game as an injury replacement and immediately ripped an RBI single to get the Cubs on the board in the second.

That momentum was short-lived when Difo tripled home another run in the fifth and came around to score on another error to put Pittsburgh in front 6-1. From that point on, it was all Chicago as they rallied off the Pirates bullpen late in the game. Jason Heyward picked up an RBI groundout in the fourth off Anderson, and that was the final run he allowed in the rest of his outing.

Fast forward to the ninth, and that is where things got interesting of Richard Rodriguez. With two runners on, Pederson came through again for his second RBI knock closing the gap to 6-3. A few pitches later, it was Ilderamo Vargas ripping an RBI double to right, and just like that, we had a 6-5 game.

Needing a base hit to tie things up, the Cubs' comeback effort came to an end as the Pirates avoid the sweep 6-5.

As part of hiring John Boog Schiambi this season, Marquee Network had tentative agreements in place to let a few others call games. We have seen Pat Hughes have his number called already, and now it was time for Beth Mowins to make history over the weekend. Mowins called a few games this spring for the team, but she became the first female to broadcast a Cubs regular-season game over the weekend.

Mowins has a long history of broadcasting games and even called an NFL game this past season. Mowins may not be well-known among the baseball community, but she is now. She has done a great job calling the games over the weekend, and there is no reason that she shouldn't get more airtime when Boog has ESPN radio gigs to do.

I would even go as far as saying that she could handle a full-time MLB play-by-play gig if a team were interesting. It is always interesting to see how different people call baseball games and interact with people in the booth. Give Mowins credit. She came in and was a natural.

Outfield, we have a problem

Not only were the Cubs down Ian Happ this weekend, but now things are going from bad to worse for the Cubs outfield. One of the hottest hitters of late has been Jake Marisnick, but he exited the game in the first inning on Sunday with apparent hamstring tightness. Pederson replaced him.

While it is unknown the severity of the hamstring injury at this point, Marisnick has been dealing with these types of issues for a few years now, so that has to be a concern. What is more concerning is seeing Jason Heyward get lifted for a pinch hitter late in the game as he is experiencing some hand pain. Should both be out, the Cubs outfield will look like Pederson and most likely Nick Martini, who was called up in place of Happ.

If that is the case, Kris Bryant is almost sure to handle center field for the time being, but the Cubs will need to add outfield depth from the minors. Guys like Rafael Ortega, who is off to a blistering start in Iowa, and Ian Miller make the most sense but keep an eye on Cameron Maybin. Hopefully, Happ is back in the mix soon because the Cubs are hurting for outfield help right now.

What to make of another Hendricks' clunker

Over the past six seasons, Hendricks has been quietly one of the more consistent pitchers in baseball. His 3.25 ERA is in the top five in the national league over that time, and he has emerged as the ace of the Cubs staff. Very rarely do you see him give up more than three runs in a start, yet that has been an issue for some reason.

Whether it is mechanics or command, Hendricks has been off this season as his ERA remains 6.23. That is coming off another outing in which he was charged with four earned runs in five innings after completely shutting down the Dodgers on Tuesday. A few bad starts here, and there isn't something to worry about, but it is a concern when it is happening more than ever this season.

Hendricks was looked at as the one guy who the Cubs didn't have to worry about in the rotation, and he is the one searching for the most answers. He has never performed this poorly for this length of time, and you can tell he is getting very frustrated by the results. Hendricks needs to figure something out and fast before he gets to the point of no return in 2021.

Kyle Hendricks gave up 4 hits with an E.V. under 74 mph today. That's tied for most such hits allowed in a game this season in MLB: https://t.co/LrFp56ClWJ