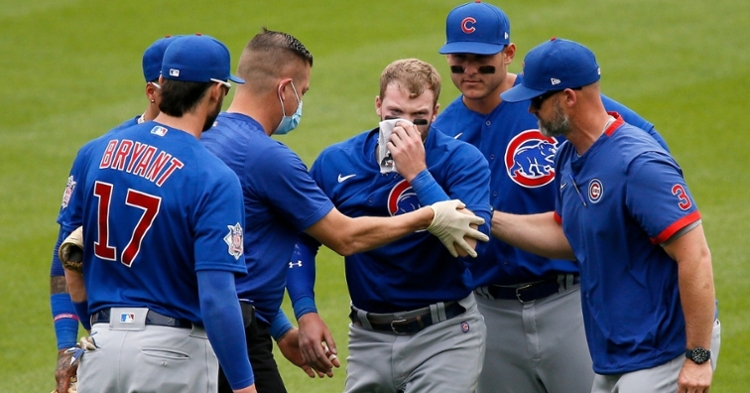 It was a typical summer day at the Great American Ballpark, except it was spring. With temperatures in the mid-'70s for the first pitch, the balls were flying out of the yard at a home run derby-style rate as both teams were having fun on the diamond.

Whether it was Trevor Williams, Tyler Mahle, Alec Mills, Justin Steele, or Tee jay Antone both the Cubs and the Reds combined to hit 10 home runs, with five coming from each side. Kris Bryant connected for a pair to go with Anthony Rizzo, Javy Baez, and Ian Happ, each picking up one each. For the Reds, Nicholas Castellanos connected for a pair with Mike Moustakas, Eugenio Suarez, and Tucker Barnhardt, bringing the thunder.

Even after all that damage, nine innings wasn't enough as both the Cubs and Reds played to 12-12 after nine innings of play. Looking to pick up a win in extras, it was the Reds who walked off the Cubs as Castellanos flared a single up the middle of Craig Kimbrel to lift Cincinnati to a 13-12 sin and sent the Cubs home on a 2-5 road trip.

Typically, when you want an offense to get rolling, you want them to show patience and work the count. After all, the more pitches they see, the better chance they will get one to their liking. More pitches also means the starting pitcher will get taken out a bit sooner as their pitch count will rise.

That can be true, but when the Cubs are overly patient, their offense tends to struggle as they typically let the excellent pitches go by and take the good ones. After witnessing what went on Sunday, maybe the team needs to be more aggressive as fewer pitches could also lead to more success.

I get that this team wants to be patient and make the pitcher work, but patience may not be an option when you chase as much as this team does. They need to be aggressive and jump on the first good pitch they see to do damage. Even if they are not making a starter work, if you can score lots of runs, they won't last long either. Maybe this is the approach they will use going forward.

A great day ends on a sour note

After struggling all season, Happ finally put together the game the Cubs were hoping for out of the leadoff spot. Not only did he pick up three hits for just his second multi-hit game of the season, but he crushed a game-tying three-run homer in the eighth to tie things up 12-12. This is the type of game the Cubs have been waiting for, and maybe this will get him trending in the right direction.

That was until one play put a damper on the day as Happ could be lost for a significant time. With a pop fly heading towards center, bother Nico Hoerner and Happ went after the ball, looking to secure the out. With neither of them calling the other off, Hoerner made the incredible catch, but Happ suffered the punishment.

In the process of going down to the ground to get out of Hoerner's way, Happ took Hoerner's knees to the just and suffered a bloody nose in a collision. Hoerner secured the out, but Happ was woozy and had to be carted off after the play.

This collision was also similar to what happened with Kyle Schwarber and Dexter Fowler leading to a torn ACL in Schwarber's knee. This collision was not that serious, but it could have been a lot worse on Hoerner, who could have blown his knee out. It appears that everyone is ok and that they both avoided serious injury.

Do you miss Castellanos?

Normally, when the Cubs make a deal at the deadline, fans tend not to get attached as they are mainly rental players. When it comes to Castellanos, that is far from the truth as Cubs fans worldwide wished he were still on their side.

Not only did he produce at a ridiculous level in Chicago, but he instantly became a fan favorite given the way he played the game. Castellanos loved the fans, loved the city of Chicago, and loved being a Cub so much that he wanted to return to the team on a new deal.

Despite the desire for him to return, the money side of the game wasn't a fit as he elected to sign a 5-year contract with the Reds for more than 100 million dollars. Had the Cubs kept him around, it would be interesting to see how their outfield would be constructed, but now they can view him as the one that got away.

During his time with the Reds, Castellanos continues to display the power potential that he showed with the Cubs, and this season he is off to a better start. During this three-game series, Castellanos was in the middle of a lot of the production, including his huge game on Sunday capped off by a walk-off single.

Castellanos is not one to hold a grudge against anyone, but when the Reds play the Cubs, you can get a sense that he has a little more to prove in those games. His defense may not be great, but his bat has never been a question. The Cubs had their chance to keep him, and they passed. Now they need to hope the production against them doesn't continue for another four years.