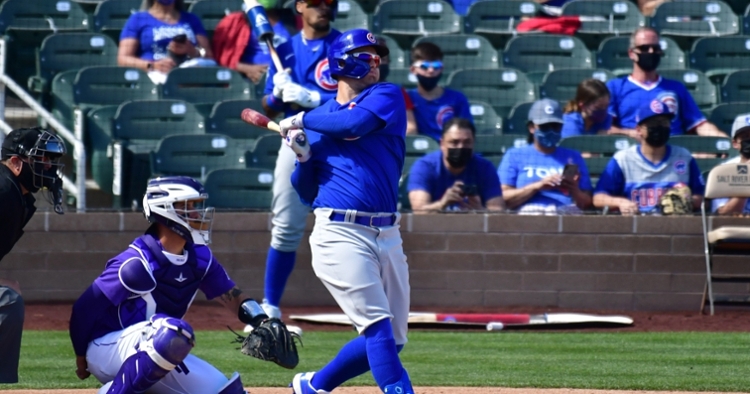 Through 11 spring training games, the Cubs sit at second place in the Cactus League standings sporting a 7-3-1 record. Not only that, but they are also one of the few teams who have yet to lose back-to-back games this spring. Coming off a loss to the Giants on Wednesday, that streak held true on Thursday as the Cubs withstood a late Rockies rally to hold on 8-6.

Making his second start of the spring, Kyle Hendricks had moments where he was extremely sharp and moments when he served up hard contact. All in all, Hendricks lasted three-plus innings, allowing four runs on seven hits, no walks, and five punchouts.

Thankfully, he was given plenty of offensive support, which happened immediately in the first inning. With a pair of runners on base, Kris Bryant reached for an off-speed pitch and deposited it down the left-field line for a two-RBI double. He was then cut down trying to advance to third on a wild pitch. Joc Pederson answered that with a solo shot to left for his fourth homer of the spring, making things 3-0.

A Cameron Maybin single followed by a great piece of hitting by David Bote set the stage for Nico Hoerner, who picked up an RBI groundout to extend the lead to 4-0. Colorado responded with a big inning of their own in the second, using a Colton Welker single to get on the bard, which was followed by a Dom Nunez blast making things 4-3.

Expecting a back-and-forth affair, Pederson continued his torrid start to the spring by connecting for his fifth homer of the spring and second of the game.

C.J. Cron kept things close with an RBI single in the bottom of the fourth as the Rockies remained within one at 5-4. With Trevor Megill the first of the bullpen arms in the game, it would be up to the Cubs offense to close things out.

Fortunately, Javier Baez delivered a long two-run shot in the sixth for his second homer of the spring as the Cubs were up 7-4.

Shelby Miller worked around a fifth-inning jam but wasn't so lucky in the sixth when Fuentes picked up an RBI single in the sixth, closing the gap to 7-5. Still 7-5 in the seventh, the Cubs loaded the bases with one down before Trent Giambrone worked a walk to extend the lead to 8-5. Colorado pulled the plug on the inning to prevent further damage.

A pair of scoreless innings from Rex Brothers and Jason Adam gave way to James Norwood in the ninth, who struggled with his command. He ultimately allowed an RBI single to bring the Rockies to within 8-6. Hoping to close out the game, the Cubs turned to Brendon Little, who needed to pitch out of a bases-loaded jam. Little was up to the task striking out the only hitter he faced as the Cubs survive 8-6.

When the Cubs elected not to retain Schwarber, it was met with mixed reviews. On the one hand, you could see why the Cubs did it coming off the season he had. On the other hand, he was only asking for eight million dollars which wasn't a terrible price.

Chicago then decided to sign Pederson to a one-year 7.5-million-dollar deal. Basically, the same type of player as Schwarber, Pederson has been on a tear this spring, hitting north of .500 and leading the Cactus League with five homers and 1.500 slugging percentage in 16 at-bats.

Pederson may get lost in the mix with core players like Baez, Bryant, Willson Contreras, and Rizzo playing for long-term deals this season.

However, should Pederson continue to hit like this or even come close to this during the regular season, he will play himself into a long-term deal. If I were the Cubs, I would take a hard look at him this offseason as he continues to impress.

No questions (unless they pertain to MORALE) please and thanks. #CubTogether

One of the Cubs biggest issues the past few seasons has been their inability to manufacture runs via small ball. Although this only happened in the first inning, this was a great example of how small ball can manufacture runs.

Following the Pederson first-inning homer, Maybin picked up his first hit of the spring. Bote then displayed a tremendous professional approach at the plate, pulling his hands in to take an inside pitch the opposite way. Not only that, Maybin went first to third on the play, with Bote taking an extra base on the throw.

Hoerner followed that up with an RBI groundout to second for the Cubs fourth run. This is a prime example of what small ball can do when teams use it. Of all the things that have disappeared from the game, small is certainly one of those things that need to be brought back. Home runs are great, but sometimes playing small ball is just as good.

Trevor Megill could be valuable in this pen

Standing at 6-8, Megill is an imposing figure on the pitcher's mound. Then add in a mid-90's heater from a downhill arm slot, and Megill is a tough pitcher to face. Known as someone with great stuff, Megill has had trouble landing on a big-league roster consistently.

Perhaps this is the year he finally does that. So far this spring, both he and Brandon Workman have been the Cubs two best relievers. With several openings still available in the pen, Megill has a great chance to earn one of those spots. He has the potential to be not only a middle reliever but has the stuff to be a high leverage reliever. Cubs' fans should watch this story unfold.