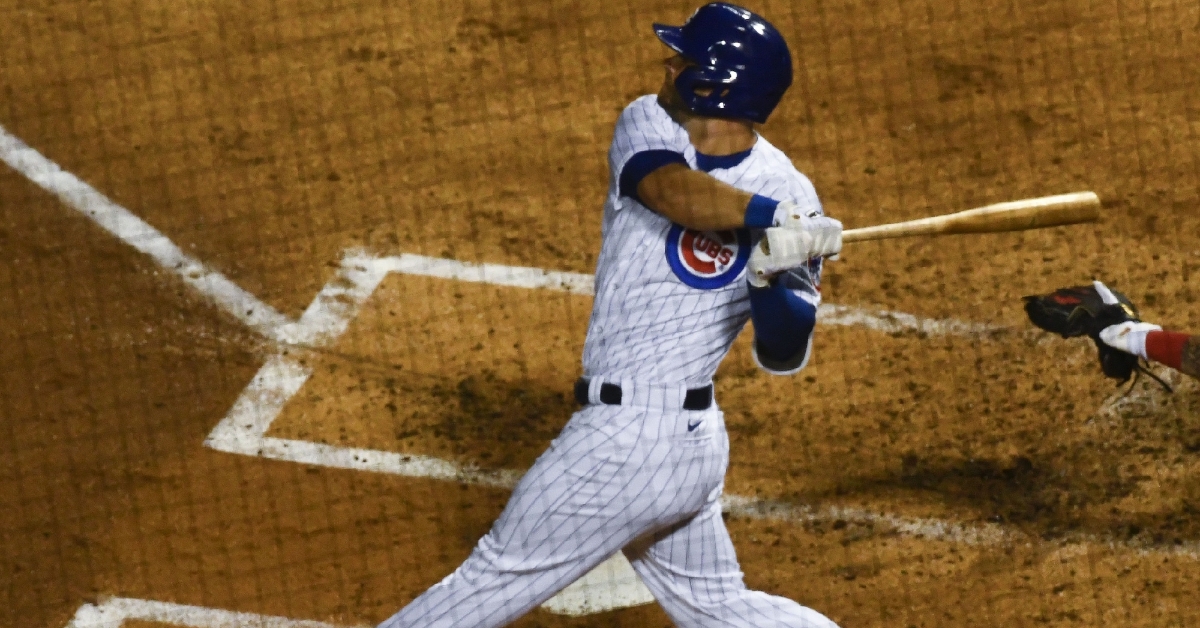 David Bote's go-ahead triple in the bottom of the second plated two runs and put the Cubs on top for good. (Credit: Matt Marton-USA TODAY Sports)

CHICAGO — On a dreary Tuesday night at Wrigley Field, a couple of two-out triples lit the way to victory for the Chicago Cubs (25-18). The North Siders plated three runs via two three-baggers and shut the Cincinnati Reds (18-24) out 3-0 in the opener of a three-game series. With heavy wind blowing in, the Cubs did not homer for the second game in a row, marking the first instance since June of 2018 that the Cubs won back-to-back contests without going yard in either of them.

Alec Mills started on the mound for the Cubs and tossed six scoreless innings, in which he struck out six batters. Reds starter Tyler Mahle racked up 10 strikeouts but was charged with all three of the Cubs' runs in his seven-inning outing. Light rain drizzled off and on at the ballpark, but the action was never delayed.

B1: Mahle tallied two strikeouts in a three up, three down first.

T2: The Reds put two men on with two outs but failed to score.

B2: With one away, Kyle Schwarber walked, and Willson Contreras reached via an infield single. David Bote came through with two outs, lining his first triple of the season to deep right field. Former Cub Nicholas Castellanos, who started in right for the Reds, misjudged the line drive and watched it sail over his head. Two runs came in to score on the play. Cameron Maybin grounded out to end the inning.

T3: The Reds went down in order their third time up.

B3: Kris Bryant was hit on the elbow by a pitch and was able to remain in the game after being evaluated by a trainer. He proved that he was all right by scooting around the bases to score on a two-out triple from Javier Baez. Baez lofted a three-bagger into the right field corner. Castellanos' shaky defense came into play again, allowing Baez to reach third for his first triple of the year. Schwarber lined out to leave Baez stranded.

T4: A two-out walk was all that Mills gave up in the fourth.

T5: Shogo Akiyama led off with a single, but Jose Garcia then grounded into a 5-4-3 double play. Tucker Barnhart plowed a double into the right field corner. Maybin misplayed the ball after it caromed off the wall, but Barnhart held up at second. Following a Joey Votto walk, Castellanos struck out swinging to end the half-inning.

B5: Maybin tabbed a leadoff base knock but did not advance beyond first base.

T6: Mike Moustakas hit a double to right-center with two down. Mills kept the Reds scoreless, though.

B6: The Cubs were sat down in order in the bottom of the sixth.

T7: Akiyama was walked by Duane Underwood Jr. to begin the top of the seventh, which ended on a 3-6-1 double play made possible by a Barnhart grounder. Billy Hamilton, a former Red, was substituted into the game as the center fielder at the start of the inning. He was added to the Cubs' roster earlier in the day.

B7: Mahle accrued two more strikeouts in his final inning.

T9: Jeremy Jeffress put a bow on the shutout and recorded his sixth save. Mills earned the win to become 4-3, and Mahle dropped to 1-2 with the loss. Underwood was credited with his first hold, and Tepera notched his second hold.

Up Next: Wednesday, Sept. 9, will see the Cubs and the Reds do battle beginning at 7:15 p.m. CDT. Conditions at the Friendly Confines are expected to be cloudy and windy. For the second time in recent weeks, Cubs ace Yu Darvish (7-1, 1.44) and Reds ace Trevor Bauer (3-3, 2.05) will square off in a matchup of right-handers.