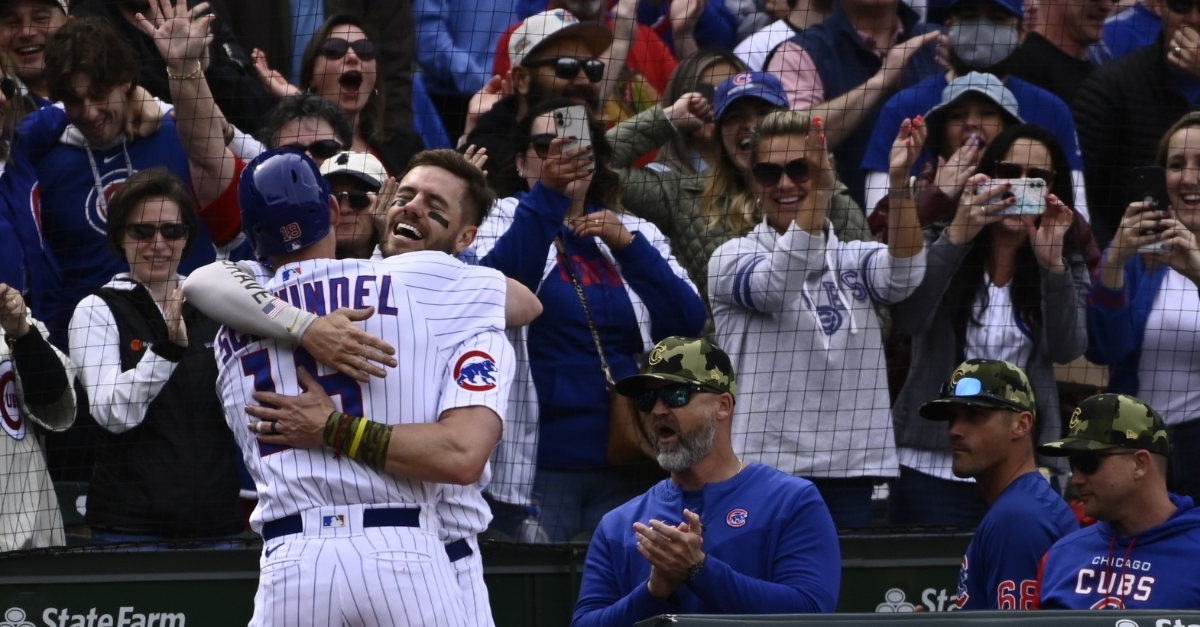 CHICAGO - Typically, Wrigley Field has always treated the Cubs well as they have historically played well at home. This season has been a much different story for the Chicago Cubs (16-24) as they are nearly 10 games under .500 and haven't played well at any point this season.

After taking the first two games of the week over the Pirates, the Cubs entered Sunday on a four-game losing streak and were in danger of getting swept by the Arizona Diamondbacks (21-22). With Wade Miley on the mound against Merril Kelly, the Cubs built an early 3-0 lead as Miley was dealing again.

That lead held until the sixth inning when the Diamondbacks rallied to tie things up and managed to take the lead in the seventh to put the Cubs on the brink of a weekend sweep. With Bryzzo no longer in town, there is a new bromance as Wisdel or Schwindom; whatever you want to call, it came up huge as the duo delivered back-to-back homers in the bottom of the night to propel the Cubs to the 5-4 win.

Miley was nothing short of amazing again through five innings, keeping the Diamondbacks off the board and making it look easy. The sixth inning was not kind to him as he started to unravel and allowed three runs in that frame before leaving the game with a no-decision. Back in his long relief swing role, Keegan Thompson entered the game in the seventh and worked the final three innings. Despite allowing the go-ahead run in the seventh, Thompson struck out four across those three innings and picked up the win in relief.

Expected to be the team's ace when the season started, Kelly has had moments where he looked like an ace, but also has moments when he hasn't. After a scoreless first that saw Kelly get through the Cubs relatively easily, he ran into some serious trouble in the second inning, with Ian Happ leading things off with a double followed by the Patrick Wisdom single.

That lead was nice, but when your offense goes cold and picks up just three hits the next five innings, adding runs is hard to come by. Even with their offense going ice cold, Miley was doing what he needed to do on the mound as he kept the Diamondbacks off the board through five innings. Considering what he did in his last start against Pittsburgh and Miley was showing again why he is worth the 10 million dollar pricetag.

Despite cruising through five innings, Miley was not off the hook quite yet, and the Diamondbacks started to solve his uptempo pace in the sixth. Drew Ellis led that inning off with a leadoff double to Rafael Ortega in center. Miley nearly worked around that double, retiring the next two hitters before Ketel Marte put the Diamondbacks on the board with an RBI single.

That single was followed by a Christian Walker base on balls and the Pavin Smith RBI single, and Arizona was within one at 3-2. The Diamondbacks comeback attempt continued with Jake McCarthy capping off his huge series with another RBI hit to bring things back to even 3-3. That was the end of the rope for Miley, who, although he gave the Cubs six good innings, left with the score tied.

With Caleb Smith now on to pitch the sixth, the Cubs had a great opportunity with Schwindel and Alfonso Rivas working walks to begin the inning. Higgins added a walk later in that frame, but a costly double play prevented the Cubs from scoring and sent the game to the seventh tied.

Thompson entered the game for the Cubs in the seventh and found himself in some early trouble allowing a pair of singles before the RBI ground out from Peralta gave the Diamondbacks a 4-3 lead. Take away those brief struggles, and Thompson was dialed in again as his ERA remains 1.67 for the season.

Still trailing by one and with six outs to work with, the Cubs offense needed to get something done with Ian Kennedy being called on to pitch. Wisdom was the first batter to face Kennedy and, after narrowly missing a leadoff, doubled one-up himself by taking one over the left-center field fence to tie things up.

Two pitches later, it was Schwindel's turn to answer as the duo went back to back for the second straight day putting the Cubs on top for good 5-4. It was the first Cubs teammates to go back-to-back in consecutive games since 1969.

That would be all the offense the Cubs would need as Thompson took over in the ninth inning to retire the Diamondbacks in order and improved to 4-0 on the season. The Cubs had eight hits in the game, with Happ and Wisdom leading the way with two. The Cubs also took six walks in the game compared to just five strikeouts, as this was a much-needed win for them.