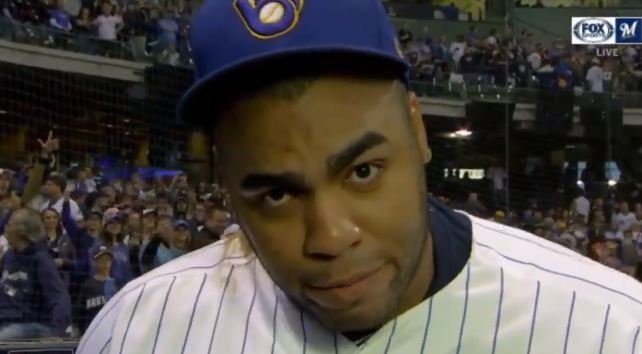 If the Cubs can hang on to their 10-5 score to win tonight's ballgame against the Cardinals, the Cubs and Brewers will play game No. 163 on Monday for the National League Central Crown.

The Brewers destroyed the Tigers on Sunday afternoon by a score of 11-0.

Brewers' first baseman Jesus Aguilar was interviewed on the field during post-game and had some trash talk for the Cubs.

"We got one more game to win so we got to go and try to win a game and celebrate," Aguilar said. "They know they got problems tomorrow."

Aguilar looked into the camera like he was talking straight out of a WWE character and not a professional baseball player. I guess we will see if his strategy works tomorrow or if it just fires up the Cubs and their fans at an energized atmosphere at Wrigley Field.

The loser of the contest will host a wild-card game on Tuesday night.