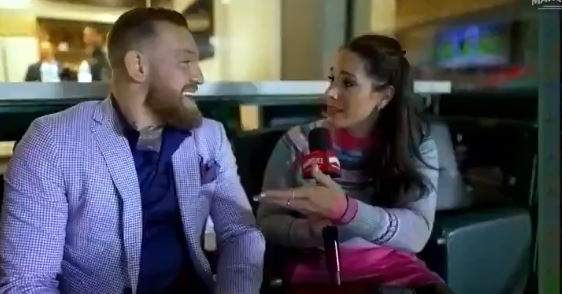 The pitch was terrible and Elise Menaker of Marquee Sports Network caught up with McGregor during the game to ask him his impressions of his pre-game performance.

“The most devastating first pitch ever seen! The venom was there, the power was there, it’s a little off accurate-wise but I’m on the one leg," McGregor told her.

“You can see me base fully on the left leg that was recently just injured. I’m happy with that, I’ll take that on board.

“I don’t think there was much power difference between mine and them out there (the players), it’s just the accuracy was a little off.

“But I’m happy with it. It was either lob it friendly or aim to take him off his feet. And if that was on target we would have had a problem, I’d say.”

It appears that McGregor has been drinking a little of his own whiskey because that pitch was nothing like something from a major league player.

Conor McGregor (@TheNotoriousMMA) on his first pitch: "The most devastating first pitch ever seen! The venom is there, the power is there." pic.twitter.com/GTZQDqUbeU

Here is the ugly first pitch: