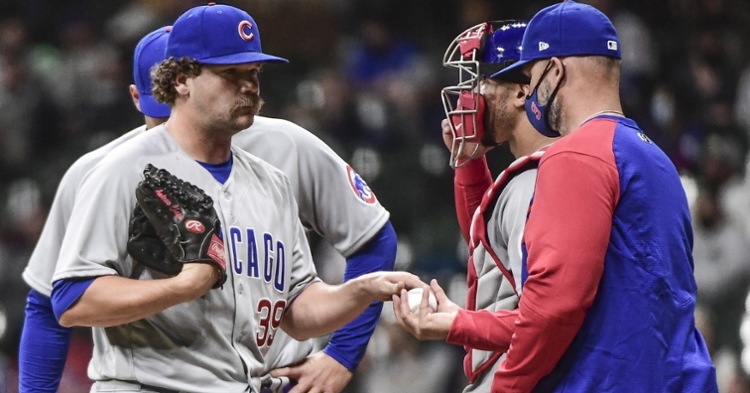 Andrew Chafin pitched 39 1/3 innings for the Cubs in 2021 and will finish the season with the A's. (Credit: Benny Sieu-USA TODAY Sports)

CHICAGO — The first domino of trade deadline week fell for the Chicago Cubs on Monday night, with veteran reliever Andrew Chafin getting dealt to the Oakland Athletics. According to MLB insiders Mark Feisand and Ken Rosenthal, the A's acquired the 31-year-old lefty, and a review of medical records will make the transaction official.

With the Cubs expected to be sellers at the deadline, Chafin is not the only member of the bullpen who could be dealt, as Craig Kimbrel and Ryan Tepera are also on the trading block. Chafin has experienced a career year and recently boasted the longest active scoreless stretch by any pitcher in the majors.

Chafin was shipped to the Cubs by the Arizona Diamondbacks at the trade deadline in 2020 and re-signed with the Cubs in the offseason on a one-year, $2.25 million deal featuring a mutual option for 2022. In his final appearance with the Cubs on Saturday, he gave up a run for the first time since May 7.

The Cubs are close to a deal to trade LHP Andrew Chafin, per source.

The A’s are on the verge of acquiring left-handed reliever Andrew Chafin from the Cubs, pending a review of medical records. @Feinsand first reported a trade involving Chafin was close.

Oakland’s deal for left-handed reliever Andrew Chafin won’t be official until the teams review the medicals of the players involved, sources tell ESPN, but if completed it gives the A’s the high-leverage arm they’ve sought. He’s been fantastic. @feinsand and @Ken_Rosenthal on it.

UPDATE: The Cubs announced the trade later on Monday night. They acquired two minor leaguers, outfielder Greg Deichmann and right-handed pitcher Daniel Palencia, from the A's in return for Chafin.

Triple A outfielder Greg Deichmann one of two players Cubs are acquiring for left-hander Andrew Chafin, sources tell @TheAthletic. Deichmann, a second-round pick in 2017, is batting .300 with an .881 OPS for Las Vegas.

Best of luck to @BigCountry1739 in Oakland.

Thank you for the endless smiles you provided Cubs fans during your time in Chicago. pic.twitter.com/DxjiqYUdYq