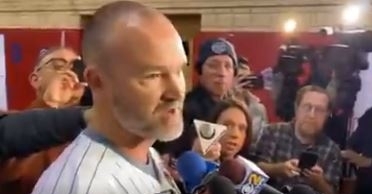 The Chicago Cubs were together Thursday to do some community service, helping pack equipment with Chicago Youth programs and schools.

Cubs manager David Ross was asked by the media at the event about the constant Kris Bryant trade rumors.

"Any manager would advocate for time with KB," he said. "I'm excited. As things stand right now, coming into camp, KB's on the roster. I expect him to be there. I think the fans should expect him to be there. It's an exciting time to be a Cubs manager because there's a lot of talent. There's no ceiling for this team. I really think this team can win the World Series. That's the way I'm looking at things."

Ross also touched on the slow offseason by the Cubs.

"The lack of moves excite me," he said. "I love the guys in the room. There is a lot of talent there. I have a lot of relationships with those guys, so I enjoy looking at that roster every day. I know there is a chance to win the World Series right there."

David Ross says “I think fans should expect” Bryant to be with Cubs Opening Day. pic.twitter.com/KKvh8dBoB8

Ross on lack of moves: pic.twitter.com/9IPKW9KUVl

Ross: “if you’re looking for a negative mindset, it’s not going to be me.” pic.twitter.com/BfIHrcbYjM