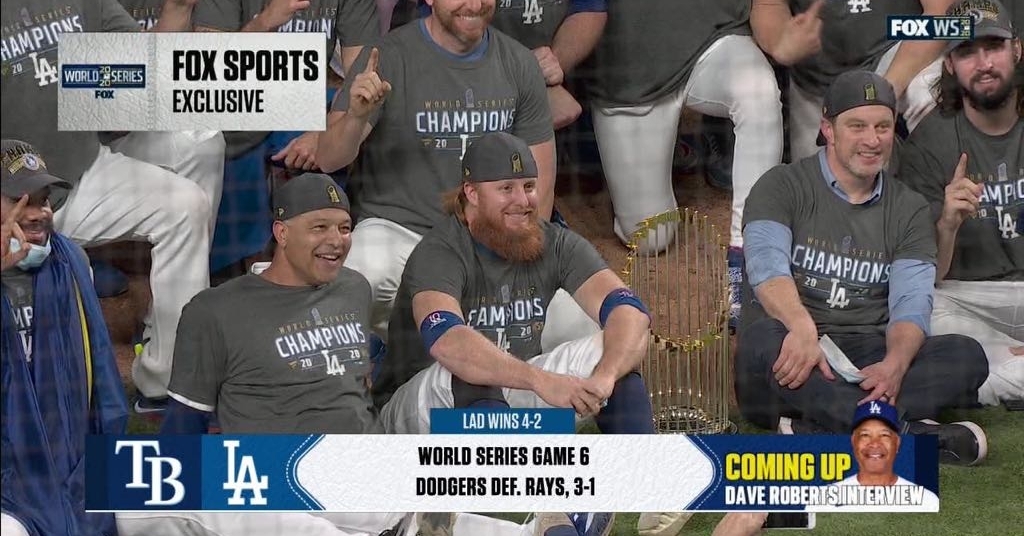 "The basic facts are well known. Justin Turner was removed from the game and directed to isolate after a positive test for COVID-19. After the game concluded, Mr. Turner left isolation and joined the on-field celebration.

“As is often the case, our investigation revealed additional relevant information that, while not exonerating Mr. Turner from responsibility for his conduct, helps put into context why he chose to leave the isolation room and return to the field. First, Mr. Turner’s teammates actively encouraged him to leave the isolation room and return to the field for a photograph. Many teammates felt they had already been exposed to Mr. Turner and were prepared to tolerate the additional risk. Second, Mr. Turner believes that he received permission from at least one Dodgers’ employee to return to the field to participate in a photograph. Although Mr. Turner’s belief may have been the product of a miscommunication, at least two Dodgers’ employees said nothing to Mr. Turner as he made his way to the field, which they admitted may have created the impression that his conduct was acceptable. Third, during the somewhat chaotic situation on the field, Mr. Turner was incorrectly told by an unidentified person that other players had tested positive, creating the impression in Mr. Turner’s mind that he was being singled out for isolation. Finally, Major League Baseball could have handled the situation more effectively. For example, in retrospect, a security person should have been assigned to monitor Mr. Turner when he was asked to isolate, and Mr. Turner should have been transported from the stadium to the hotel more promptly.

“Mr. Turner has publicly recognized that his conduct was wrong and has expressed remorse for that conduct. I have spoken to him personally and I know that he is extraordinarily upset by the incident. By all accounts, Justin is a leader in the clubhouse, a contributor to his community and a responsible person who was instrumental in the Dodgers diligently following the health protocols all season long.

“Staging a baseball season during the COVID-19 pandemic was an incredibly difficult undertaking and it required significant sacrifices and an enormous amount of work by players, club staff and the Commissioner’s Office. We all have made mistakes as we navigated these unprecedented challenges and have tried to learn from those mistakes so they are not repeated. With this in mind, I am closing this matter by applauding Justin for accepting responsibility, apologizing and making a commitment to set a positive example going forward.

“Finally, I thank the millions of baseball fans for supporting the game in difficult times. As a way of giving back, MLB, through its clubs, will continue to make its COVID-19 testing laboratory available this off-season to perform testing in under-served areas in the communities we call home. We look forward to returning stronger in 2021.”

“In winning the World Series last Tuesday, my teammates and I delivered a championship to the city of Los Angeles after a long 32-year wait. We realized the dream of every kid who is a fan of our great game. However, it did not go the way I had dreamed or any of us would have hoped. As my teammates and I were on the verge of clinching the title, I was blindsided with the news that I had tested positive for COVID-19. I was promptly taken out of the game and my wife Kourtney was notified and immediately removed from the wives/family section at the stadium. We watched the final two innings of the game together in a doctor’s office in the back of the clubhouse.

“Watching the conclusion of the game we experienced every emotion you could imagine – we were thrilled for my teammates, the Dodgers organization and all of its fans, and the city of Los Angeles, but also sad and confused with so many questions about what we were just told. It was a surreal moment. We sat and watched the celebration, the trophy presentation, and Seags win the much-deserved MVP trophy on a TV in the doctor’s office. I tweeted to assure everyone I was okay and to tell my teammates how proud of them I was that night.

“I will not make excuses for my conduct, but I will describe my state of mind. Winning the World Series was my lifelong dream and the culmination of everything I worked for in my career. After waiting in the isolation room while my teammates celebrated on the field, I asked whether I was permitted to return to the field with my wife in order to take a photograph. I assumed by that point that few people were left on the field. I was under the impression that team officials did not object to my returning to the field for a picture with my wife. However, what was intended to be a photo capturing the two of us turned into several greetings and photos where I briefly and unwisely removed my mask. In hindsight, I should have waited until the field was clear of others to take that photo with my wife. I sincerely apologize to everyone on the field for failing to appreciate the risks of returning to the field. I have spoken with almost every teammate, coach, and staff member, and my intentions were never to make anyone uncomfortable or put anyone at further risk.

“Kourt and I hold ourselves to the absolute highest standards. We worked diligently to comply with all of MLB’s protocols throughout the season. We were heavily involved in the planning of player/family safety to ensure the possibility of a postseason and World Series. We helped local businesses stay afloat by ordering meals to help the DreamCenter of LA feed almost 1 million Angelenos during COVID lockdown. Through my foundation, I will continue to support organizations in the Los Angeles area that assist our community in the battle against the virus.

“The support and love that I have received from every one of them has truly left its mark on Kourt and me, and I could not be more proud to be a part of this team.”

“The events involving Justin Turner during the World Series celebration unfolded rapidly and chaotically, and were ultimately regrettable. The Dodger organization takes the health and safety of everyone associated with staging a baseball game extraordinarily seriously, and are committed to putting in place better processes for future events.

“Through much hard work and sacrifice, the Dodgers were successful at preventing COVID-19 infections throughout a very difficult 2020 season. No player was more instrumental in allowing the Dodgers to overcome the adversity created by the pandemic than Justin Turner, as he set an example for his teammates and advocated for enhanced safety measures that went above and beyond league requirements. Justin’s leadership played a large part in helping the Dodgers safely complete the entire season, which culminated in a World Championship.

“While the events following the conclusion of the World Series were unfortunate, there is no question about who Justin Turner is, and what he means to his teammates, the Dodger organization and the City of Los Angeles. A three-time nominee for the Roberto Clemente Award as Baseball’s top humanitarian, Justin and his wife Kourtney represent the best of the Dodger organization through the positive impact of the Justin Turner Foundation and their continued commitment to making Los Angeles a better place.”