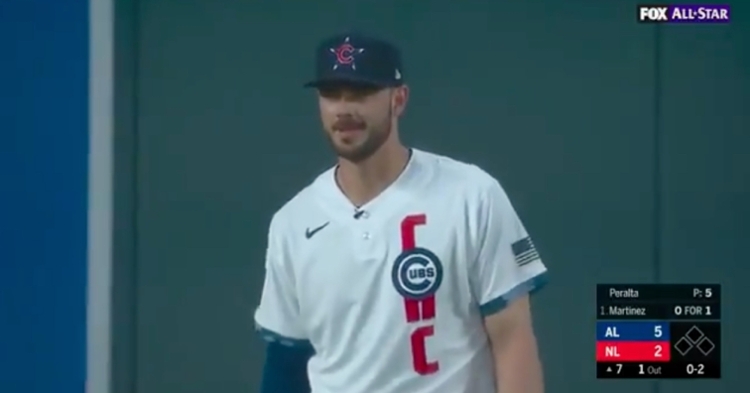 The 2021 installment of the MLB All-Star Game featured a bevy of in-game interviews, with several players wearing earpieces and microphones while on the field so that they could communicate with FOX broadcasters Joe Buck and John Smoltz. This made for a viral moment surrounding Chicago Cubs slugger Kris Bryant, who told Buck that he was proud of "having the Cubs on [his] chest" and "play[ing] for such an unbelievable city."

The noteworthy exchange literally came out of left field, where Kris Bryant was playing defense at the time, and served as one of the more interesting moments of Tuesday's broadcast. However, not everyone appreciated the in-game interview at Coors Field, as Bryant's father, Mike, took Buck to task for his line of questioning.

Bryant's aforementioned heartfelt response was preceded by Buck asking the third-baseman-by-trade how he remained focused on baseball while being at the center of so many trade rumors. "KB" certainly did not seem to take offense to the question, but his dad was rather irked by it, which he revealed in an interview with Cubs Insider.

"I simply cannot express my disappointment at Joe Buck asking my son about his future with the Cubs while he was playing left field in the All-Star Game," Bryant said. "This was a classless act and has no place in the game. I'm so glad I was at the game and not watching it."

Although it is customary for Cubs fans to bemoan Buck's broadcasting, Bryant's complaint was personal, as the protective father found it to be distasteful for Buck to bring up trade chatter while yukking up with his son in the midst of a game. Bryant was so offended by it that he opined that Buck should apologize to his son.

"There's a time and a place for stuff like this," Bryant said, "and this was neither. Kris deserves an apology."

For what it is worth, the question was likely fed to Buck by producers, as it seemed to be the most logical inquiry to make when chatting with arguably the biggest name currently on the trade market. Regardless, Buck's interview of Bryant did not generate any sort of substantial criticism of Buck. Bryant's dad certainly did not hold back in his critique, though, but will almost certainly have his wish of Buck apologizing go unfulfilled.