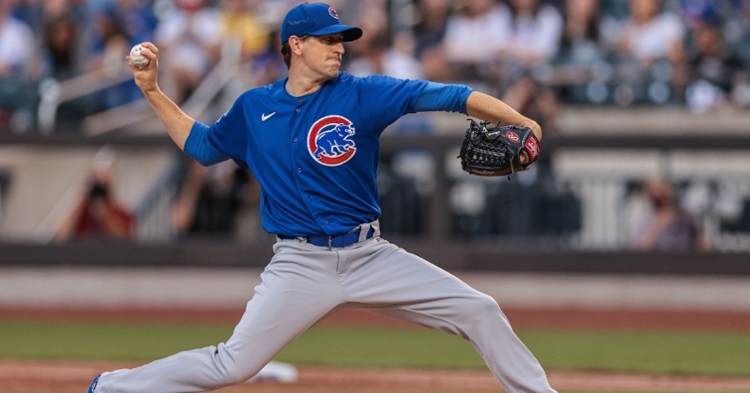 Kyle Hendricks is reportedly not being shopped by the Cubs, but the same cannot be said about Craig Kimbrel. (Credit: Vincent Carchietta-USA TODAY Sports)

CHICAGO — Chicago Cubs president of baseball operations Jed Hoyer is likely to trade away quite a bit of veteran talent prior to Friday's trade deadline and has already sent reliever Andrew Chafin to the Oakland Athletics. Closer Craig Kimbrel , the star of the Cubs' bullpen, is also expected to be on the move, and ESPN reporter Jesse Rogers stated in an appearance on ESPN 1000's "Waddle and Silvy" on Monday that Kimbrel could be traded "sooner rather than later."

"I really think Craig Kimbrel is top priority right now," Rogers said. "That's where Jed is going to get the best return, so I think he's going to go sooner rather than later. I think those teams out west could really use him, and Jed could get a haul from one of them because there's an arms race out there."

Referring to the three National League West contenders, the Los Angeles Dodgers, San Diego Padres and San Francisco Giants, Rogers alluded to the value that Kimbrel could bring to a team in need of bullpen help now that he has reestablished himself as baseball's best closer. Kimbrel is drawing attention from a litany of clubs, with the fact that he is under contract through next season assuredly contributing to that.

"He's a finishing touch for a World Series contender," Rogers continued. "So I expect Kimbrel to go pretty soon. It could be today. It could be tomorrow. Within the next few days."

As for starter Kyle Hendricks, MLB.com reporter Mark Feisand claimed on Monday that the ace is "not being shopped." Feisand did leave the door open on Hendricks, who is under contract through 2023, getting dealt at the deadline, though, as he cited "a monster offer" as something that could potentially change the outlook of the Cubs' front office.

Feisand made clear, however, that Hoyer and the Cubs are "not trying to move" Hendricks, meaning that the veteran hurler figures to play a leading role in the rebuilding journey that the Cubs seem destined to embark on in the not-too-distant future. As for Kimbrel, his Cubs tenure is likely coming to a close, with the North Siders' bullpen in the midst of a major shakeup brought on by Hoyer's desire to sell at the deadline and prepare for the future.

Although the Cubs have a number of players up for grabs, don't count on Kyle Hendricks being part of the exodus. The pitcher is "definitely not being shopped" according to a source, and barring an unexpectedly great offer, the Cubs are "not trying to move him."