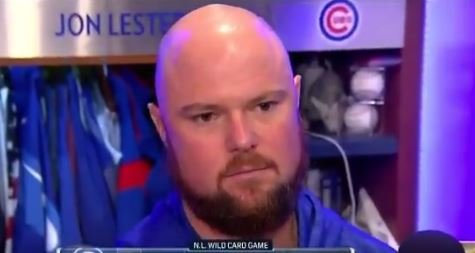 The Cubs' 2018 season is over after falling to the Rockies 2-1 in extra innings in the National League Wild Card game.

During postgame interviews, Lester will honest about his assessment of the team.

"I feel like in the game of baseball, you can never predict anything," he said. "Sometimes you have to take the bad with the good. Right now we are taking the bad. For lack of a better term, sometimes you need to get your di$% knocked in the dirt to appreciate it where we're at. Maybe we needed that."

Lester still thinks this team would win tomorrow if they could play again.

"There’s not a group of guys I would take into another one-game playoff tomorrow then this group," he said. "I would like to think we would win it."

Lester finished up another solid campaign finishing 18-6 with 3.32 ERA and 149 strikeouts.

VIDEO: @Cubs ace @JLester34 says sometimes you need to "get your dick knocked in the dirt" to appreciate what you have. Wise words from a future HOFer. #GoCubsGo #CubsTwitter pic.twitter.com/Mqg0CLYXPA