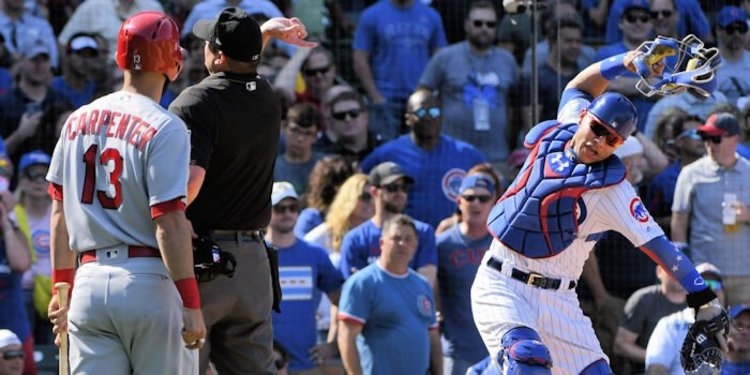 Chicago Cubs catcher Willson Contreras has been suspended two games and fined by major league baseball for his actions during Friday's win against the Cardinals. Contreras has appealed and will be in the lineup batting cleanup for Saturday's game as the appeals process will begin.

Lackey was just fined instead of a suspension for arguing with home plate umpire Jordan Baker.

During Friday's game in the fifth inning, an apparent strike three call should have ended the inning as Carlos Martinez was already walking back from the batter's box to the dugout, but the pitch was called a ball. Of course, Martinez hit a RBI single on the next pitch, and the Cubs went bonkers especially Lackey and Contreras.

Lackey obviously argued, and Contreras threw his catcher's mask on the ground near the umpire as he was upset by the turn of events in the ballgame. If Contreras didn't throw his mask as it made contact with the umpire, he more than likely would not be facing a two-game suspension during the crucial final weeks of the regular season.

The sequence of the John Lackey meltdown after a horrible call. Along with Contreras getting thrown out as well. pic.twitter.com/8BWWx8BXRl

Here is how #Cubs catcher Wilson Contreras got ejected. pic.twitter.com/oU7PH8kpDr