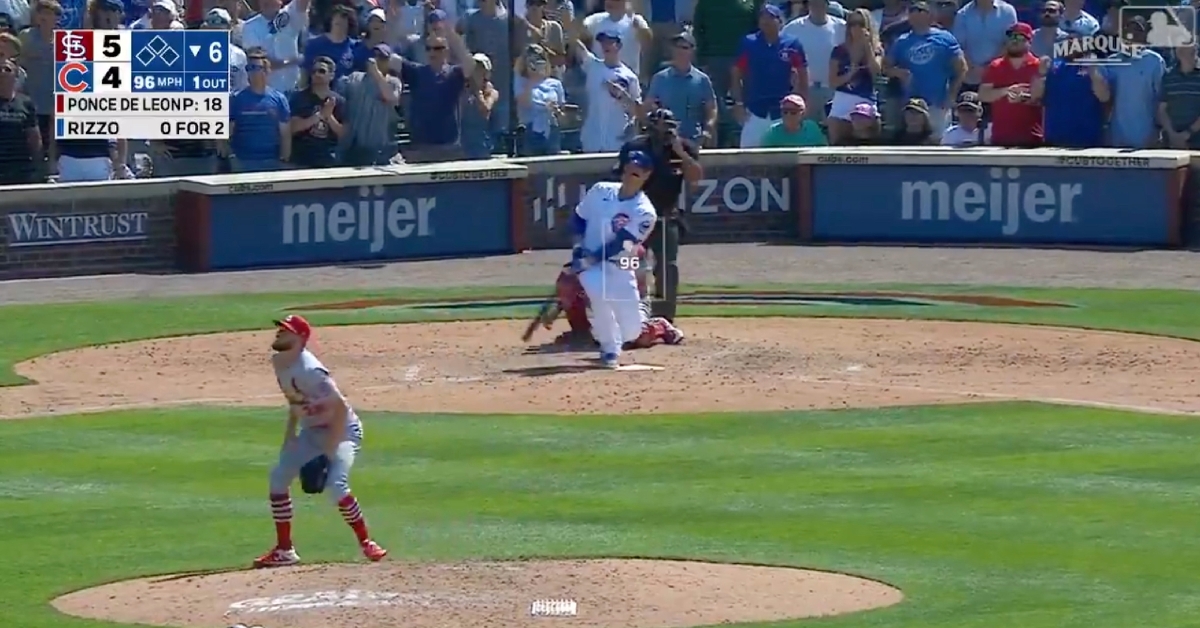 Energizing the Wrigley Field crowd, Anthony Rizzo smacked a game-tying blast on the 14th pitch of an at-bat.

CHICAGO — Making for a magical moment in the first full-capacity game at Wrigley Field since 2019, Chicago Cubs first baseman Anthony Rizzo showed plenty of grit at the plate in a 14-pitch at-bat and capped it off with a game-tying home run on Friday. Rizzo fouled off 10 pitches in the plate appearance, nine of which came with two strikes, and went yard on a 2-2 count.

Motoring around the bases, Rizzo was fired up after lining a 393-foot shot out to right field, with the Friendly Confines faithful erupting as soon as he made contact. "Big Rizz" received a standing ovation from the supportive crowd during his hard-fought at-bat. After the Cubs trailed 5-1 earlier in the game, the sixth-inning solo shot tied the St. Louis Cardinals at 5-5.

Reliever Daniel Ponce de Leon gave up the dinger on a 96.1-mph four-seamer. Rizzo's seventh long ball of the year, the bomb was smoked off the bat at 110.1 mph. It also sported a launch angle of 22 degrees. Rizzo now holds the franchise record for the longest at-bat ending in a homer since pinch counts were first tracked in 1988. The fan favorite, who currently has 27 RBIs, received a curtain call from the "Bleacher Bums" after returning to the dugout and obliged his adoring supporters.

Baseball is better when Wrigley Field is full. #CubTogether

Anthony Rizzo just homered on the 14th pitch of a PA, to tie the game for the Cubs

That's the most pitches into a plate appearance that a Cubs player has hit a HR since pitch counts have been tracked (1988) pic.twitter.com/hq6CIhLUXT