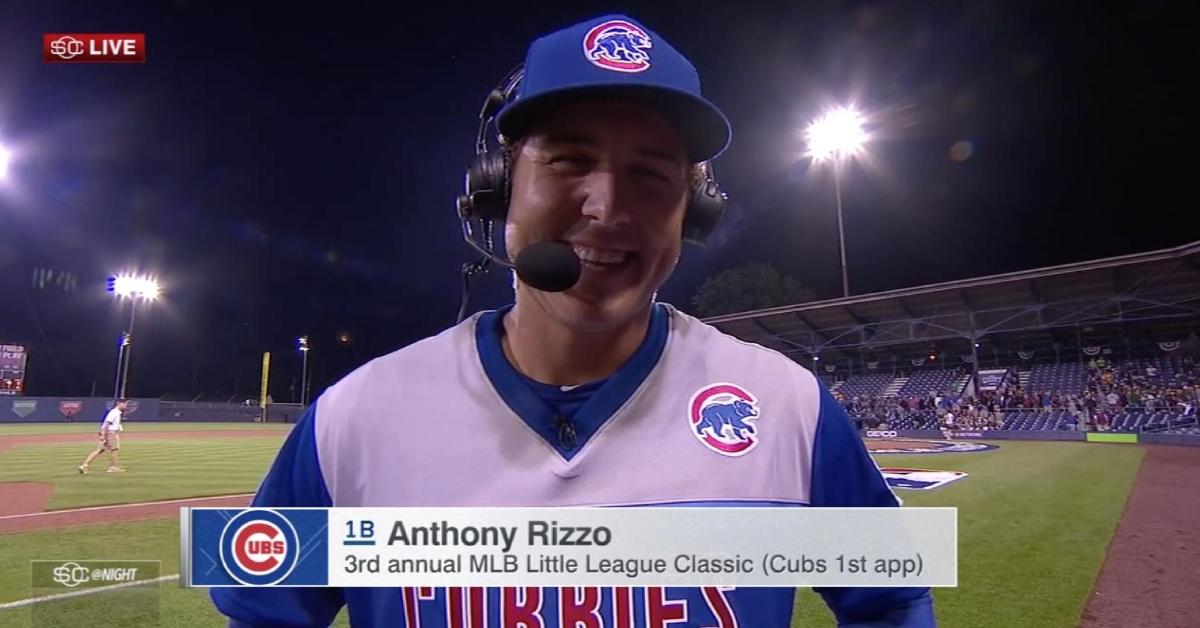 It is safe to say that Chicago Cubs first baseman Anthony Rizzo had a ball at the 2019 MLB Little League Classic.

WILLIAMSPORT, Pa. — Fun-loving Chicago Cubs first baseman Anthony Rizzo had the time of his life at the 2019 MLB Little League Classic, with the slugger engaging in the pregame festivities and hitting an impressive 2-run home run during the course of the Cubs' 7-1 win over the Pittsburgh Pirates. After the game, Rizzo was interview on ESPN's SportsCenter and talked about the experience.

"It was really cool," Rizzo said of the third annual MLB Little League Classic. "It's something that I'll look back at and remember for a long time, just how special it was."

Making their debut in the event, which coincides with the Little League World Series, the Cubs lived it up before the game, and, true to form, Rizzo was the life of the party. From sliding down the iconic hill behind the Little League ballpark in Williamsport, Pa., to playing catch with young fans and chatting with the little leaguers in attendance at the Cubs-Pirates game, Rizzo took part in a little bit of everything, which he discussed in his postgame press conference.

"Everyone else was doing it," Rizzo told reporters when explaining what enticed him to sled down the hill on a piece of cardboard. "It's pretty steep, and the walk back up is no joke."

Rizzo on sliding down hill on cardboard pic.twitter.com/AMBMXNrIz3

Another great moment that Rizzo was at the center of involved him giving the home-run ball that he hit to a Japanese little leaguer in the stands. After watching the young shortstop play earlier in the day, Rizzo was so impressed with the member of the Japanese Little League team that he wanted him to garner a special souvenir. Therefore, with Cubs starting pitcher Yu Darvish, who is Japanese, serving as a translator, Rizzo gifted the little leaguer the home-run ball.

"What better way than to get Yu Darvish to translate for me," said Rizzo. "I had the perfect translator, and I got to talk to the (Japanese) team for a little bit."