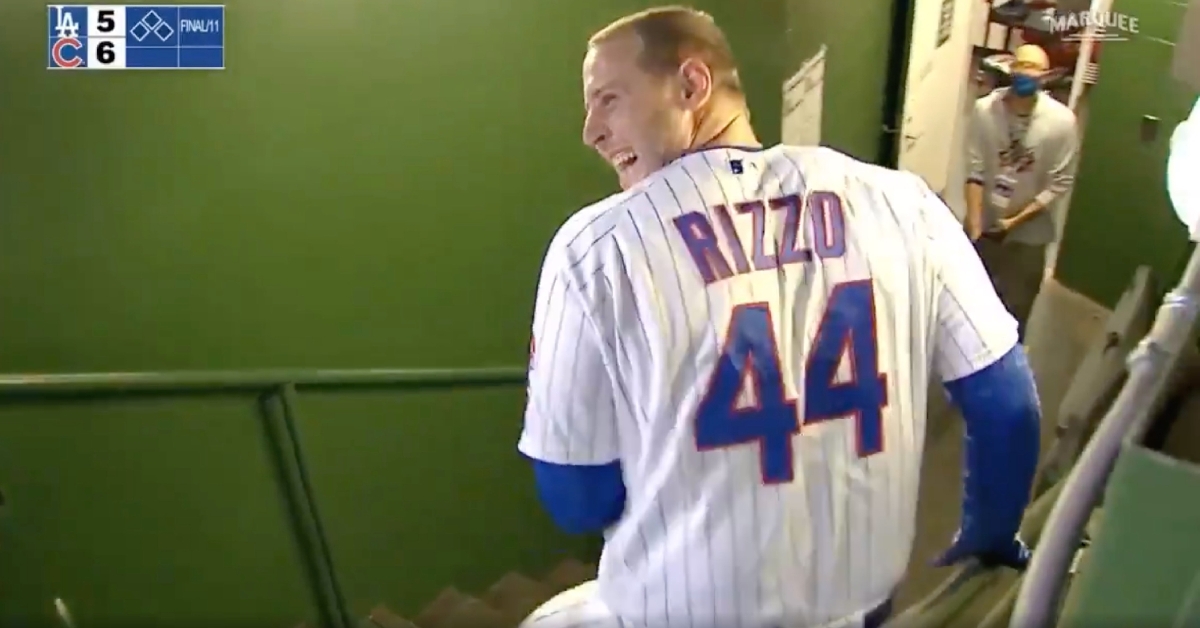 Anthony Rizzo did not wait around to be pounced on and doused in water by his rowdy teammates.

CHICAGO — For the second straight night, the Chicago Cubs won a walkoff thriller in extra innings over the Los Angeles Dodgers. This time around, first baseman Anthony Rizzo, who was supposed to have the night off before entering as a pinch hitter late in the game, beat the shift with an RBI single to left-center, and the Cubs won 6-5 in 11 innings at Wrigley Field.

Rizzo made up for a gaffe that he committed in the top of the 11th, when he did not step on first base before firing to shortstop Javier Baez at second base on what could have been an inning-ending double play. Baez assumed that Rizzo, who fielded a grounder right next to the bag, had stepped on first, so he did not make a throw back to Rizzo. As a result, first baseman Max Muncy scored from third on an RBI groundout by right fielder Mookie Betts.

Third baseman Matthew Duffy came through with two outs in the bottom of the 11th, scoring catcher Willson Contreras from second with a base knock to center off reliever Garrett Cleavinger. Following a walk of pinch hitter Tony Wolters, Rizzo won the contest for the Cubs and completed the team's three-game sweep of the Dodgers by swatting a Cleavinger fastball through the infield, which scored Duffy from second.

The fun-loving first baseman ran away from his celebratory teammates, who were aiming to mob him in jubilation on the infield. Rizzo had other plans after collecting his 11th RBI of the season, as he immediately hustled into the dugout and down the stairs to the clubhouse, with a camera in the dugout catching Rizzo looking back and smirking at his teammates while descending the steps. With all of that being said, Rizzo's "night off" featured much more excitement than the Cubs likely expected.

Anthony Rizzo walks-off the Dodgers and runs straight down the stairs. pic.twitter.com/4aovKsfPa7