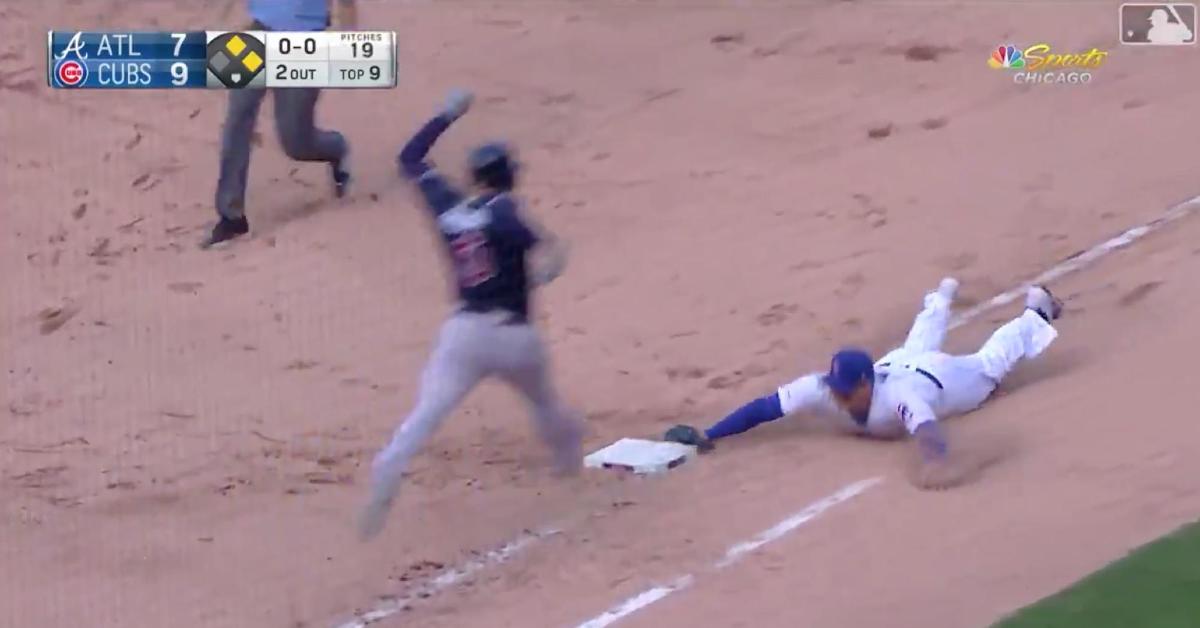 Anthony Rizzo laid out in order to collect the game-winning out at first base.

CHICAGO — Closer Craig Kimbrel made his highly anticipated Chicago Cubs debut in a contest against the Atlanta Braves, the team that he pitched for from 2010 to 2014, on Thursday. Securing his first save as a Cub, Kimbrel was able to stave off the Braves in the top of the ninth and finish off the Cubs' thrilling 9-7 victory at Wrigley Field.

The Cubs came back after trailing by five runs early on, making it their largest comeback of the season, but they needed an impressive defensive feat by first baseman Anthony Rizzo to wrap up the win. After collecting two outs on the first two at-bats of the frame, one of which was Kimbrel's first strikeout with the North Siders, Kimbrel gave up a pair of 2-out baserunners.

Following a mound visit, Kimbrel faced off against Braves first baseman Freddie Freeman, who smacked a chopper to Rizzo down the first baseline. After fielding the hard-hit ball, Rizzo engaged in a footrace to the bag with Freeman, and, as a last-ditch effort that paid off, Rizzo dove toward the base and swiped it with his mitt just before Freeman reached first.

Rizzo's all-out effort on the final out of the ballgame locked up the Cubs' riveting 9-7 win and gave Kimbrel his first save out of the Chicago bullpen. Kimbrel appreciated the heart displayed by "Big Rizz" on the game-ending play, so he gave Rizzo a warranted hug after his Cubs debut ended on a high note. Giving up one hit and one walk to go along with his one strikeout, Kimbrel threw 20 pitches, 13 of which were strikes, in his first outing with the Cubs.