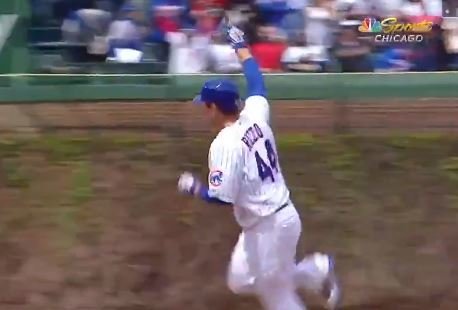 Anthony Rizzo is on a hot streak offensively.

During Friday's game against the rival Cards, Rizzo blasted a three-run homer to put the Cubs up 3-0.

It was Rizzo's 198th career homer which tied him with Hank Sauer for 9th place on the Cubs all-time list. The homer was his fourth in five games as it went 379 feet with an exit velocity of 102.5 MPH.

UPDATE: #Cubs lead Cardinals 3-0 after Rizzo cranks his 8th of the year & there were a lot of high fives passed out afterwards. Catch the action on @NBCSChicago or stream on the MyTeams app: https://t.co/Xw5veoaEE8 pic.twitter.com/mCU5dwRMIE