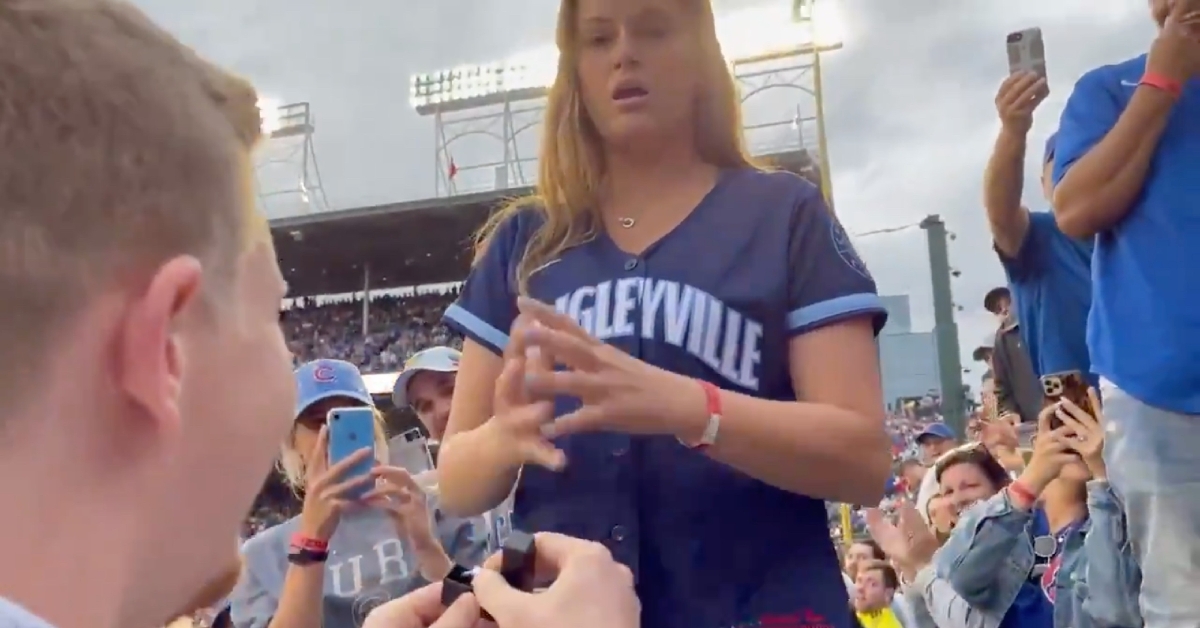 Onlookers cheered as a couple of Cubs fans got engaged in the left field bleachers at Wrigley Field.

CHICAGO — Love was in the air at Wrigley Field on Saturday night, as two different marriage proposals took place while the Chicago Cubs took on the St. Louis Cardinals. One of the proposals was captured on video, and it featured a young lady sporting a City Connect Cubs jersey being completely caught off guard by her boyfriend dropping to one knee and popping the question.

A guy wearing a home Jason Heyward jersey posed for a picture with his girlfriend and proceeded to kneel and unveil a diamond engagement ring. Nearby onlookers in the left field bleachers cheered on the proposal, which was accepted. Although Heyward did not start in Saturday's tilt, the right fielder would have proud to know that his jersey brought the bachelor good luck.

Guy beside me in the @cubs bleachers just proposed to his girlfriend. #cubs #GoCubsGo @WatchMarquee pic.twitter.com/6U9oE4m2Ol

Another engagement was made possible through the usage of the scoreboard at the Friendly Confines, with Taylor Enterline proposing to his girlfriend, KT Louise Watz, via a scoreboard message. The betrothed couple shared a couple of photos on Twitter of the special occasion. Although there is no love lost between the Cubs and their Cardinals, their rivalry helped love flourish in the Wrigley Field bleachers.

got promoted to fiancé at wrigley field ???? @Cubs pic.twitter.com/qEMsSZY9O1