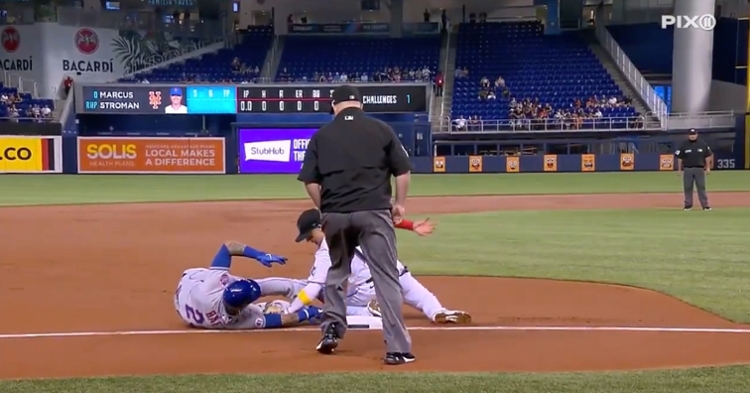 Mets second baseman Javier Baez went all out when avoiding a tag and scored a run soon afterward.

MIAMI — The New York Mets may have lost to the Miami Marlins on Thursday night, but it certainly was not due to a lack of production from second baseman Javier Baez. The former Chicago Cubs superstar did a little bit of everything on offense in the 3-2 contest, scoring both of the Mets' runs, going yard and stealing two bases.

Baez's most impressive feat of the evening, however, came in the top of the first at LoanDepot Park, when "El Mago" put his trademark swim move to good use on an impeccable headfirst slide into third base. Baez took off when a pitch was thrown in the dirt, and he safely reached third on the wild pitch by successfully eluding the tag.

Another wild pitch soon followed, and Baez scored as a result, giving the Mets an early 1-0 lead. Javy also made a splash at the plate, powering a 438-foot solo bomb out to center field in the third inning. He went on to steal both second and third in the sixth frame. Baez, who now has 29 home runs, 78 RBIs and 16 stolen bases on the year, went 2-for-3 with a walk, but his sliding prowess stole the show.

Javy is feeling it tonight!! pic.twitter.com/ckD8JSFlrw