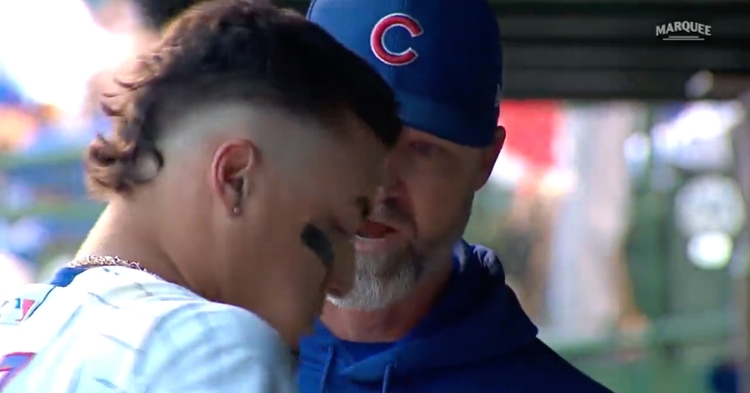 David Ross talked with Javier Baez after Baez suffered a mental mistake on the basepaths. Ross subsequently replaced Baez in the lineup.

CHICAGO — In a situation reminiscent of then-Chicago Cubs left fielder Kyle Schwarber being removed from a game by manager David Ross in 2020 after misplaying a ball in the outfield, shortstop Javier Baez was pulled from Monday's game after forgetting how many out there were and running from first to third when a fly ball was hit with one out. The boneheaded baserunning gaffe caused Ross to end Baez's night.

Baez evidently thought that there were two outs when first baseman Anthony Rizzo hit a routine fly ball to left field in the bottom of the fourth, so he sprinted around the bases, only to have the Cleveland Indians double him off at first base, resulting in an embarrassing inning-ending double play for the Cubs. Between innings, Ross chatted with Baez in the dugout and then benched him, which Baez accepted without an argument. With the Cubs trailing the Indians 1-0 at Wrigley Field, Sergio Alcantara took over for Baez at shortstop.

UPDATE: Ross explained his decision to bench Baez to the media after the game, implying that Baez's frustration over a lack of plate production might have distracted him. Baez reached base by grounding into to a fielder's choice, making him 0-for-2 on the evening, as he grounded into an inning-ending double play earlier in the contest.

David Ross on pulling Javy: “We have to make sure we’re focused and locked in during the game. Sometimes our frustrations can distract us a little bit.”