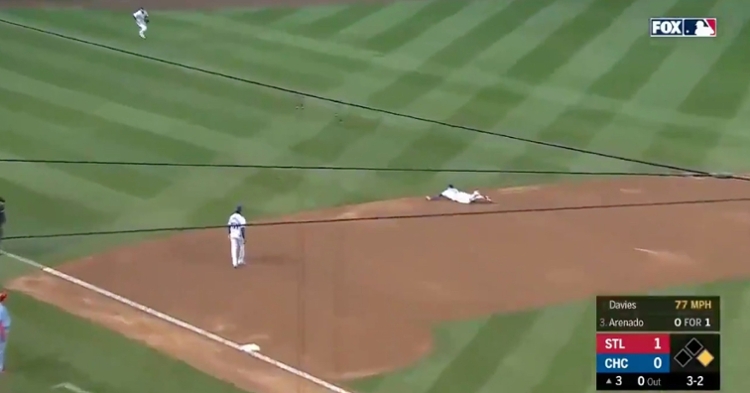 Javier Baez dived onto the infield dirt in order to snag a ground ball hit by Nolan Arenado.

CHICAGO — Not to be outdone by Chicago Cubs first baseman Anthony Rizzo going all out and jumping into the protective netting in an effort to catch a foul ball, shortstop Javier Baez laid out for a superb diving stop in the very same plate appearance. St. Louis Cardinals third baseman Nolan Arenado put together a nine-pitch at-bat in the top of the third on Saturday, and it ended with Baez robbing him of a hit.

With the Cubs taking on the rival Cardinals at Wrigley Field, Rizzo tried his best when attempting to snag a foul ball off the bat of Arenado and ended up taking an empty-handed spill into the protective netting. Baez made up for Rizzo's maximum effort going unrewarded by displaying plenty of effort himself soon afterward, as he lunged to his right in the 5-6 hole and prevented a ground ball from carrying into left field.

After gloving the hard-hit grounder, Baez sat up and fired a throw to second baseman Nico Hoerner for a force out. Once first baseman Paul Goldschmidt, who reached via a leadoff single, was outed at second base, Hoerner threw to Rizzo at first base, but Arenado beat the throw out. Baez's web gem, which was part of a scoreless frame, may have resulted merely in a fielder's choice, as opposed to a 6-4-3 double play, but it prevented the Cardinals from sporting runners on first and second with no outs and a decent chance at adding to their 1-0 lead.