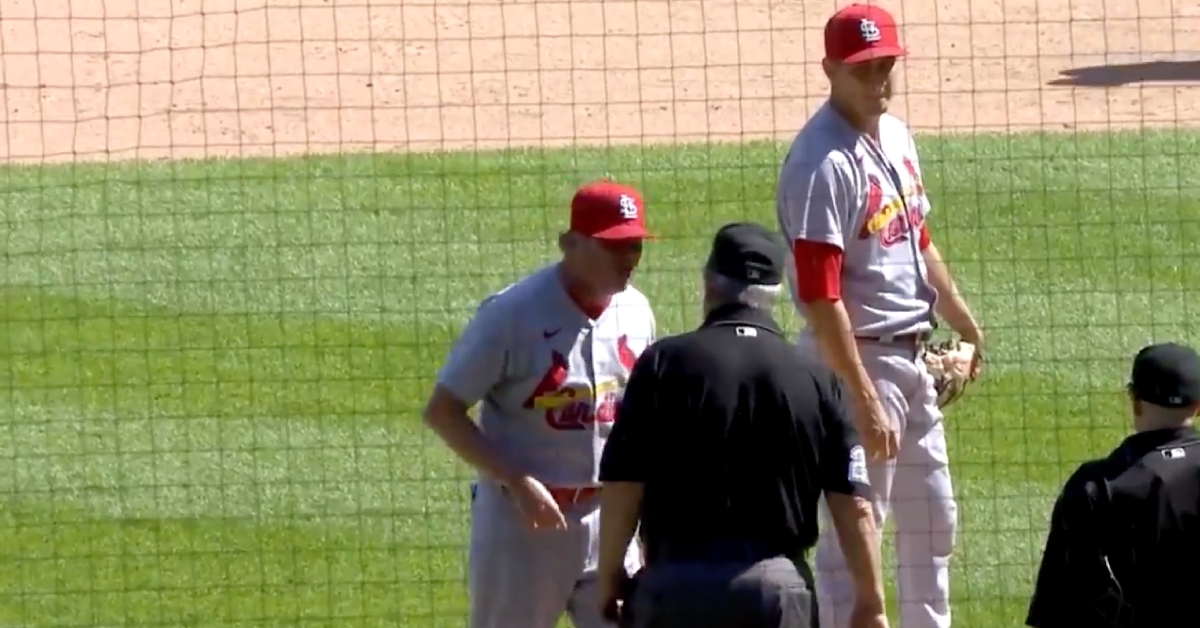 Joe West forced Giovanny Gallegos to change his hat before he started pitching, and Mike Shildt did not take kindly to that.

CHICAGO – Fresh off establishing a new MLB record by umpiring his 5,376th regular season game on Tuesday, 68-year-old crew chief Joe West epitomized what makes him so polarizing in Wednesday's game at Guaranteed Rate Field between the Chicago White Sox and St. Louis Cardinals. The Cardinals won 4-0 but had to finish off the game without manager Mike Shildt, who was ejected in the bottom of the seventh.

Shildt marched out to the mound and quickly began giving West a piece of his mind after West confiscated Cardinals reliever Giovanny Gallegos' hat, and, like West is known to do, the veteran umpire wasted no time in making an ejection. The hat in question had a foreign substance on it, which is not out of the ordinary in MLB.

Joe West tells Cardinals pitcher Giovanny Gallegos to change his hat because he noticed a foreign substance then he ejects manager Mike Shildt for arguing pic.twitter.com/sBdrorzEIY

The gray area surrounding the usage of pine tar and other substances to aid a pitcher's grip has been nebulous for years. While pitchers coating a part of their body with pine tar is typically frowned upon, having the substance on the bill of a hat is often considered acceptable.

"I have a great working relationship with the umpires and Major League Baseball," Shildt said in his postgame press conference. "They have a lot of challenges to doing their job, and they do it well. Having to police foreign substances, candidly, shouldn't have to be a part of their job."

Mike Shildt sounds off on Giovanny Gallegos' hat being confiscated: "You want to police some sunscreen and rosin? Go ahead. Get every single person in this league. ... Why don't you start with the guys that are cheating with some stuff that's really impacting the game?" pic.twitter.com/02RetNKwQZ

Although Shildt was ejected, Gallegos was allowed to remain in the game and continue pitching. He merely donned a clean cap and retook the mound. However, Shildt was not pleased with what he perceived to be unfair treatment regarding Gallegos being forced to change hats.

A more lenient umpire – instead of the notoriously stringent "Cowboy Joe" – might have simply ignored the spot on Gallegos' cap. Regardless, Gallegos, who was approached by West as soon as he took the mound after being called upon in the bullpen, pitched 1 2/3 scoreless innings and earned a hold for his efforts.