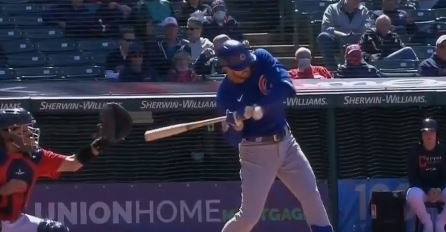 It's not been a great few days for Kris Bryant.

Bryant was out of the lineup today after being removed during Wednesday's game because of being sick.

However, Bryant wanted to give it his all, so he came into the game in a pitch-hitting role in the seventh inning with runners on the corners.

Unfortunately for Bryant, he got hit in the left wrist by a 95 MPH fastball from Cal Quantrill.

The trainer came out to look at Bryant, and the standout third baseman immediately left the game after attempting to walk to first base slowly.

No word yet if he has a wrist issue or taken out because he is still sick. We will update you as soon as we get the information from officials.

Update: The Cubs announced that he has a wrist contusion and is day-to-day.

For the season, Bryant is batting .308 with nine home runs and 22 RBIs.

Extremely sick KB comes in to pinch hit in the 7th and gets DRILLED in the left wrist and then removed from the ballgame.@Cubs #GoCubsGo pic.twitter.com/8zVk4A3FFq