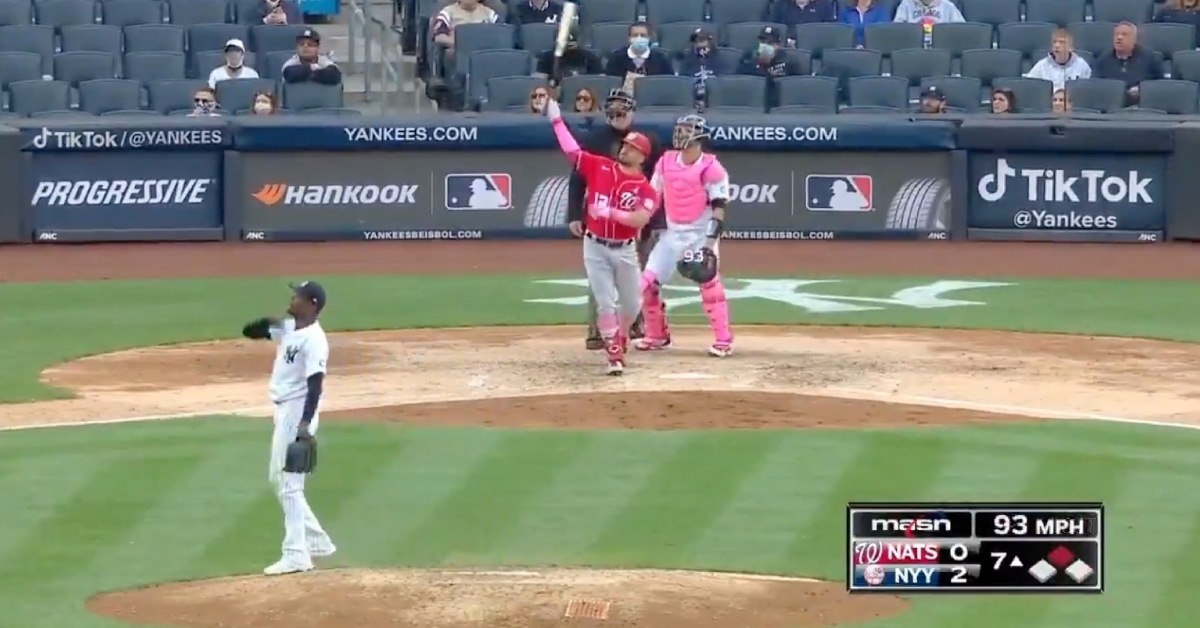 Kyle Schwarber ogled his rainmaker of a home run before carrying out the baseball equivalent of a mic drop.

NEW YORK — All three of former Chicago Cubs left fielder Kyle Schwarber's home runs thus far this seasons have been doozies. The first two homers of 2021 for the first-year Washington Nationals slugger were a 463-foot solo walkoff blast and a 454-foot two-run walkoff bomb, respectively, and the third dinger was a 412-foot two-run rainmaker powered out on Sunday afternoon.

With the Nationals taking on the New York Yankees at Yankee Stadium, Schwarber took starter Domingo German deep in the seventh inning. The towering jack sailed 387 feet out to right field at a steep launch angle of 37 degrees. The round-tripper, which came on a 93-mph four-seamer, left the bat at 103.3 mph. Schwarber knew that he had just hit a "Schwarbomb" as soon as it left the bat, and he celebrated the beastly homer with a calm, cool and collected bat drop.

Marveling at his handiwork before leaving the batter's box, Schwarber was not shy about showboating after plating first baseman Josh Bell and tying the game at 2-2 via his meteoric long ball. Unfortunately for the Nats, they failed to score again after Schwarber went yard with one out in the top of the seventh, and the Yankees went on to win 3-2 and take 2-of-3 in the series.

Had to drop something off. pic.twitter.com/m2lG9QZEIB