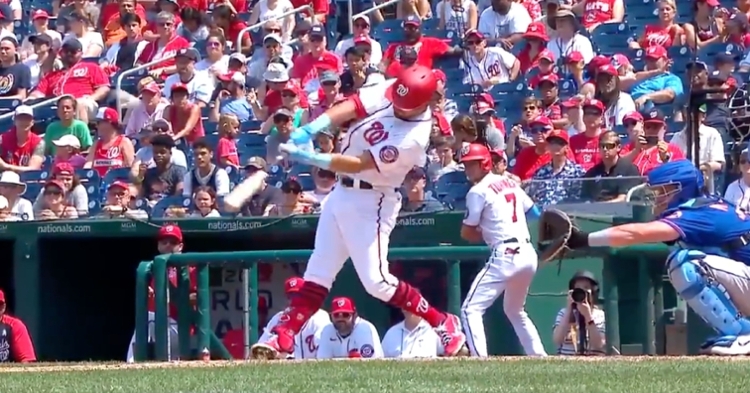 In Sunday's 5-2 Nationals win over the Mets, Kyle Schwarber went 3-for-4 with three home runs and four RBIs.

WASHINGTON — Former Chicago Cubs left fielder Kyle Schwarber has been thriving in the leadoff spot for the Washington Nationals as of late, and he went on a homer-hitting tear over the weekend, powering out two home runs in the same game on Saturday and smacking three taters in the same game on Sunday. Schwarber, who tied an MLB record by hitting five home runs in two games, now has 18 dingers and 42 RBIs in his first season with the Nationals.

At Nationals Park on Sunday, Schwarber drove in four of Washington's five runs in a 5-2 Nationals win over the New York Mets. In the Nats' first plate appearance of the game, Schwarber slugged a 418-foot go-ahead jack. He again led off with a long ball when he walloped a 374-footer to begin the bottom of the fifth. Schwarber's final round-tripper of the afternoon was a two-run blast in the seventh frame, which marked the fifth "Schwarbomb" in a span of 13 innings. After swatting his third bomb of the day, Schwarber obliged a curtain call from the fans and saluted them from the dugout steps.

We moved Kyle Schwarber to the leadoff spot on June 8.

Kyle Schwarber has 8 HRs since June 12.