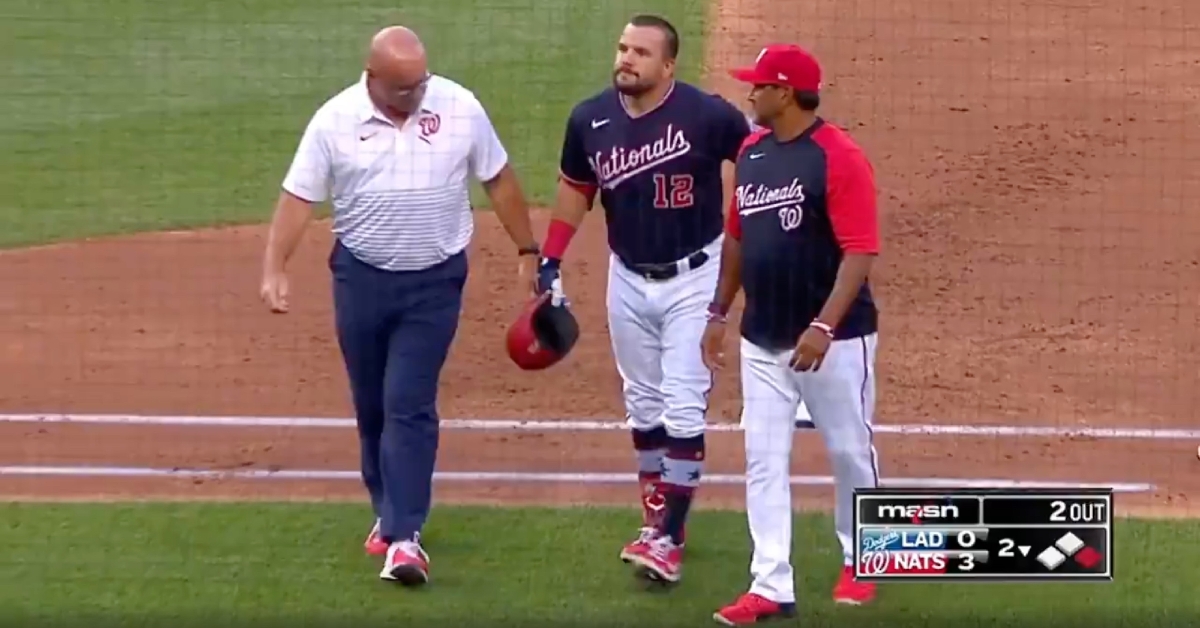 Kyle Schwarber pulled up with an apparent right hamstring injury after rounding first base. He was then removed from the game.

WASHINGTON — In June, no hitter in baseball experienced more success at the plate than Washington Nationals left fielder Kyle Schwarber, who hit 16 home runs over the course of the month. He also became just the third player in MLB history to power out 15 dingers in a span of 17 games.

Unfortunately, Schwarber's chances of having his June success carry over into July took a serious hit due to an apparent hamstring injury suffered by the former Chicago Cubs slugger at Nationals Park on Friday. Schwarber appeared to injure his right leg while rounding first base upon hitting a second-inning single against the Los Angeles Dodgers.

With Schwarber grabbing at the back of his right leg, manager Dave Martinez and a trainer came out to evaluate Schwarber, who proceeded to hobble off the field. He slammed his helmet down in frustration before leaving first base and was subsequently replaced in the lineup.

Schwarber did not bend his right leg while gingerly heading to the dugout, which was not a good sign. He has racked up 25 home runs and 53 RBIs in his first season with the Nationals and has a chance to be named to his first All-Star team in the coming days. Prior to Friday's game, Schwarber was honored as June's National League Player of the Month.

Kyle Schwarber has been removed... hope all is okay. pic.twitter.com/UvPFFINgDr

UPDATE NO. 1: Martinez later announced that Schwarber had been diagnosed with a right hamstring strain and would be out of action for an extended period of time.

Dave Martinez says he doesn’t like putting timetables on injuries, but this will definitely be more than a 10-day IL situation for Kyle Schwarber. Tough, tough break for the Nationals, right as they were finding their stride.

UPDATE NO. 2: On Saturday, Schwarber was placed on the 10-day injured list.

The Nationals announced a series of roster moves including Kyle Schwarber to the IL and the acquisition of SS Alcides Escobar from the Royals: pic.twitter.com/3DCF0YXDvN