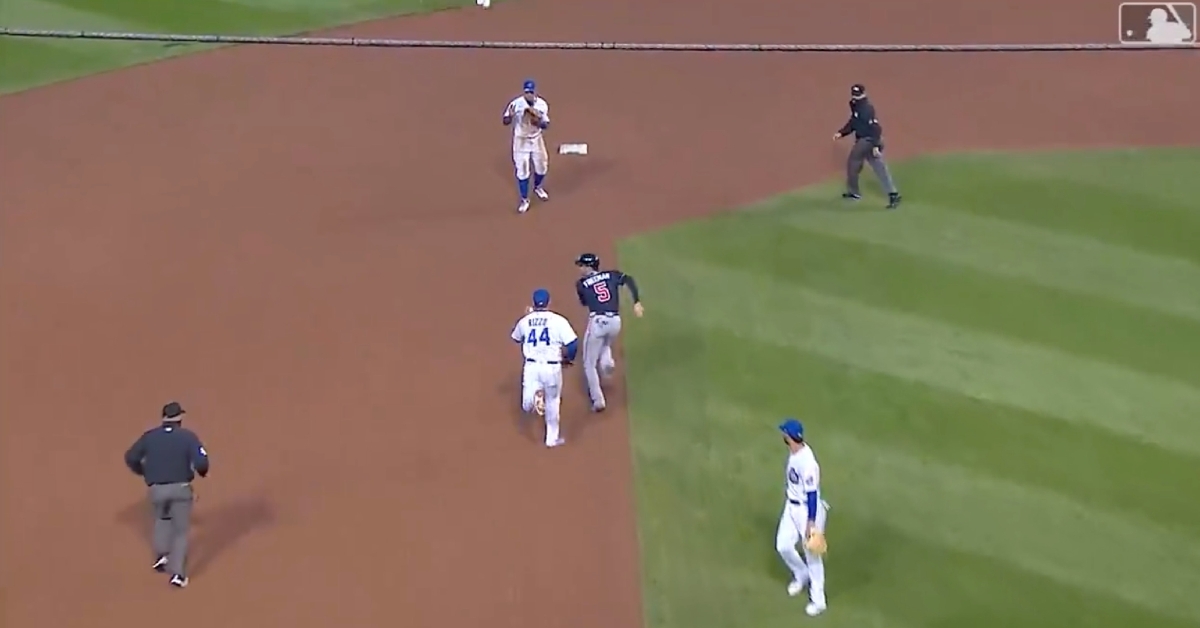 Anthony Rizzo chasing after fellow first baseman Freddie Freeman in a rundown made for a viral moment.

CHICAGO — In addition to being arguably the two best defensive first basemen in the majors, Freddie Freeman of the Atlanta Braves and Anthony Rizzo of the Chicago Cubs are good pals. They also share a fun-loving attitude on the baseball field that makes for plenty of hilarious moments during games in which they are playing. Therefore, when a mic'd-up Anthony Rizzo had the chance to make Freeman laugh on Sunday, he did not shy away from it.

ESPN wisely chose to have the always entertaining Rizzo wear a microphone for the "Sunday Night Baseball" broadcast of the Braves' 13-4 win over the Cubs at Wrigley Field. Rizzo's plate performance was one of the few bright spots for the Cubs in the lopsided affair, as the veteran slugger hit a pair of solo home runs on the night. However, his viral moment from the contest did not involve the swinging of a bat. Instead, it revolved around the name Frederick.

Frederick is Freeman's given name, and Rizzo assuredly knew that, leading to "Big Rizz" shouting the regal-sounding moniker while pursuing Freeman in a rundown. Rizzo was actually responsible for Freeman getting caught in the pickle, as he wisely cut off an inconsequential throw to the plate in the top of the fourth and opted to try for a much likelier out. The lumbering Rizzo eventually pursued the similarly heavy-footed Freeman between second base and third base prior to shortstop Javier Baez applying the inning-ending tag on Freeman.

While giving chase, Rizzo shouted Freeman's legal first name at the confined baserunner before also crying out the shortened version of the name, Freddie, that most everyone knows Freeman by. That culminated in Freeman, even after getting tagged out, smiling from ear to ear and laughing along with Rizzo as they left the field. ESPN aired Rizzo relaying the funny moment with center fielder Ian Happ in the Cubs' dugout. Thankfully, the memorable mic'd-up moment was shared with the viewing public, and, as a result, quite possibly the funniest rundown highlight in MLB history was born.

Anthony Rizzo mic'd up during the rundown is comedy ?? pic.twitter.com/6mAHEeG5E4