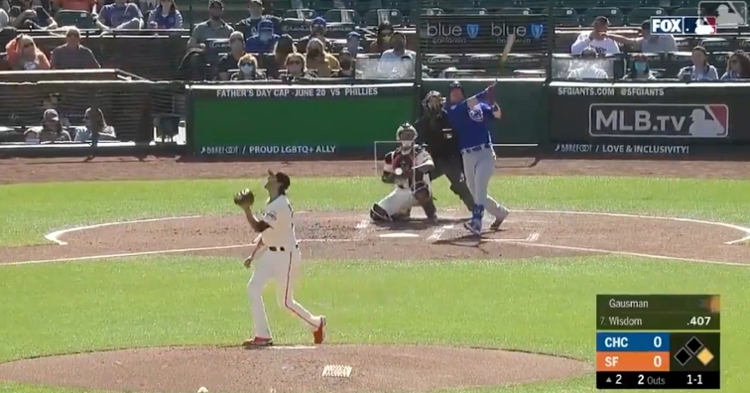 Patrick Wisdom walloped a two-run blast that increased his 2021 RBI total to seven.

SAN FRANCISCO — With his fourth home run in less than a week and career-high fifth home run of the season, Chicago Cubs third baseman Patrick Wisdom swatted a two-run jack in the top of the second on Saturday. The two-out dinger, which landed in the visiting bullpen beyond center field at Oracle Park, put the Cubs up 2-0 over the San Francisco Giants.

First baseman Anthony Rizzo, who reached as the second-inning leadoff hitter due to a fielding error committed by shortstop Brandon Crawford, was scored via Wisdom's 418-foot blast. Starter Kevin Gausman gave up the long ball on a 96.4-mph four-seamer, with the round-tripper leaving the bat at 107.8 mph and 36 degrees.

HOME RUN INTO THE BULLPEN ??

Patrick Wisdom gets the @Cubs on the board early! pic.twitter.com/IsEA1eSPA2

Most home runs in first 7 starts as a Cub: