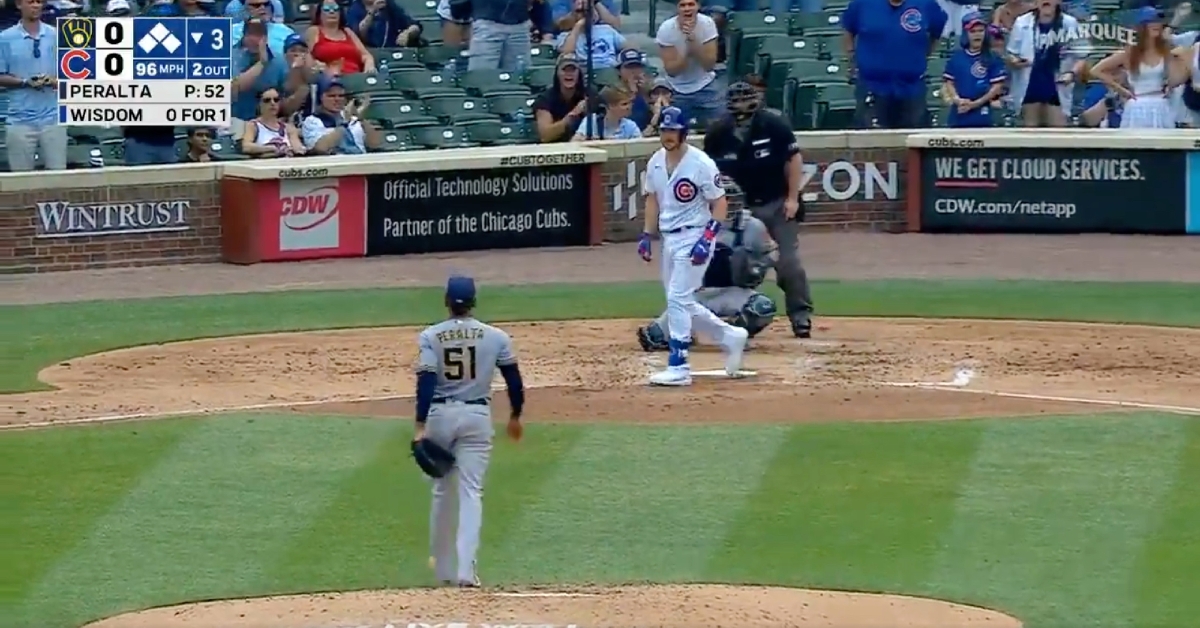 After drawing a walk on a payoff pitch, Patrick Wisdom flipped his bat and stared down Freddy Peralta.

CHICAGO — Bad blood has boiled between the Chicago Cubs and Milwaukee Brewers this season due to the disproportionate amount of hit by pitches that the Cubs have been on the receiving end of in matchups with the Brewers. For example, catcher Willson Contreras has been plunked four times by Brewers pitching this year, including the third inning of Tuesday afternoon's game at Wrigley Field.

Contreras was beaned on the hand by starter Freddy Peralta to load the bases in the bottom of the third and was clearly unhappy about it. Although it did not seem intentional, Cubs third baseman Patrick Wisdom did not take kindly to it and stared down Peralta after drawing a walk on a full count two plate appearances later.

Contreras hit by a Brewers pitcher what else is new pic.twitter.com/zvaNq5BcVB

Peralta forced home second baseman Sergio Alcantara by walking Wisdom with two outs and the bases loaded. After collecting the base on balls to put the Cubs up 1-0 over the Brewers, the usually mild-mannered Wisdom showed off his fiery side by flipping his bat and casting a menacing glance in Peralta's direction while sauntering down the baseline.

The inning ended soon afterward Wisdom's tense RBI, and the tension did not carry over into the fourth frame.

Patrick Wisdom draws a bases-loaded walk and gives a little stare, plus a flip of the bat, on his way to first base. Contreras was hit by a Peralta pitch to load them up earlier in the 3rd. pic.twitter.com/0dwaIvbznK