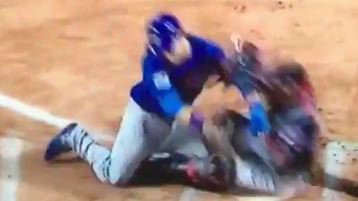 Cubs shortstop Addison Russell had a two-run double to put the Cubs up 3-0 in the first inning of the World Series on Tuesday night.

The Indians center fielder made an error (was not called an error officially) and then Ben Zobrist proceeded to run over the catcher to make sure he was safe.