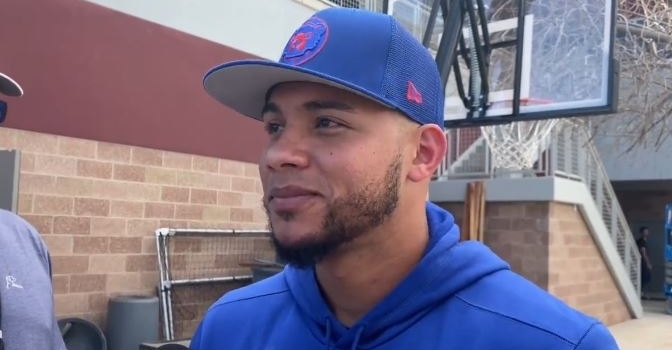 Contreras talked about his lack of extension talks with the Cubs

Chicago Cubs catcher Willson Contreras was back at Spring Training on Sunday to get ready for the 2022 regular season.

Contreras spoke to the media for a few moments and shared that there have been no extension talks with the Northsiders.

Contreras said he is open to talking with the Cubs but just wants to have a good season.

"I'm always open," he said. "You know me. I'm not focused on that. I'm focused on having a good year, having fun with my team, and trying to win."

Contreras said that he knows there is a chance that he could be traded during the season because he is eligible to be a free agent after the season.

"Those things were in my head before I got here," he said. "Obviously, it happened last year; it can happen this year. Whatever happens in the middle of the year is going to happen. Life goes on."

Here’s Willson Contreras, on extension talks with Cubs. He’ll be eligible for free agency after this season. Said going to free agency, given his career path and beginnings, could be “a dream come true.” pic.twitter.com/gF8CQQ1L17