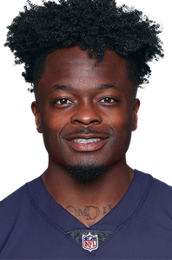 Played in nine games (six starts) and registered 12 receptions for 186 yds and 1 TD before being placed on the Injured Reserve List on 12/10
Connected with QB Jimmy Garoppolo on a 38-yd. TD. at Cincinnati (9/15). It marked Goodwin's first TD of the season and 13th of his career. He finished the game with 3 catches for 77 yds. and 1 TD

In his first season with San Francisco, he started in all 16 games, catching a career-high 56 passes for a career-high 962 receiving yards with two TDs
Goodwin logged three 100-yard receiving performances (Weeks 5, 14-15), including one where he logged a career-high 10 receptions vs. Tennessee in Week 15

Appeared in 15 games with 9 starts for Buffalo. Caught 29 passes for 431 yards and three TDs
Hauled in the longest reception of his career, an 84-yard TD from Tyrod Taylor in Week 2 vs. New York Jets. Goodwin finished with two receptions for 112 yards and a TD in the game

Another season plagued by injuries, only appeared in two games, recording two receptions for 24 yards

In 2014, hobbled by numerous injuries (concussion, ankle, ribs, and hamstring), Goodwin caught only one pass for 42 yards, which came against the Detroit Lions