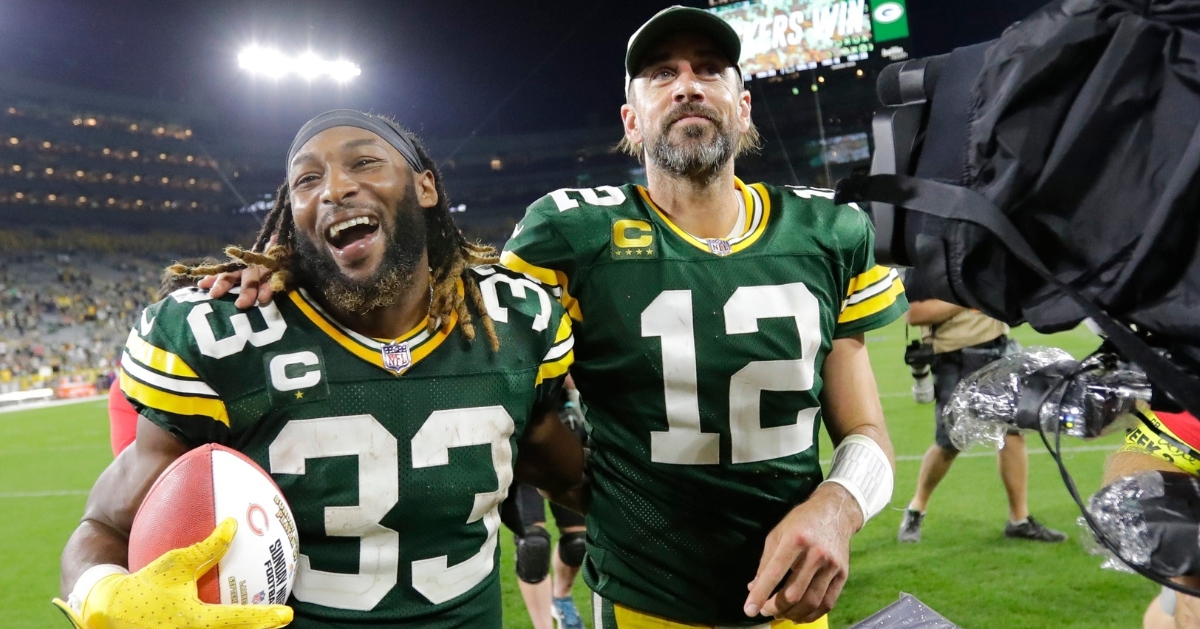 GREEN BAY - There will come a time when Aaron Rodgers eventually hangs it up with the Green Bay Packers (1-1), and that will make the Chicago Bears (1-1) and their fans extremely happy. Until that day comes, you have to wonder if the Bears will ever finish above this Packers team in the standings, especially when Rodgers is now 22-3 all-time against Chicago.

Looking to start the season 2-0, the Bears traveled to one of their house of Horrors in Lambeau Field as they were looking for their first win in that building since 2015. What started as a strong showing for the Bears went south in a hurry as the Packers ripped off 21 unanswered points to put the game away and pulled away for the 27-10 win. That happens when you have a performance like Justin Fields did, as he went just 7-11 for 70 yards and an interception.

That is not going to cut it in the NFL, and we are seeing far too much of that from him. If the first quarter was any indication of how things were going to go, fans were not only going to be treated to some hard-hitting football, but two teams that were going to make you earn every yard you got. For the Packers, they received the opening kick and used up nearly half of the quarter driving down the field.

It took the Packers 13 plays to go 53 yards, with the longest play coming on a 15- yard pass to Aaron Jones. There was also a 14-yard pass to Sammy Watkins as those two plays accounted for more than half the yardage on that drive. Despite the Packers moving the ball, the Bears defense held and forced the Packers to settle for a 40-yard Mason Crosby field goal.

Looking to answer, the Bears had better fortunes on their opening possession, and from all accounts, this was their best possession of the game. David Montgomery played a massive role in this drive as he had a solid game with 15 carries for 122 yards. The big play came when Fields hooked up with former Green Bay WR Eqanimeous St. Brown for the 30-yard gain to move to the ball inside the Packer 30.

Three plays later, it was Fields making something happen again, but this time with his legs as he got to the corner and beat the defense to the endzone for the three-yard score to put the Bears up 7-3. This was not only the lone lead for the Bears but also the last of their points for quite some time.

After stalling out on their opening possession, the Packers turned to Quad Zilla AJ Dillon to open their second drive as he began to wear down the Bears defense. That started to open up the passing game where Christian Watkins got involved along with Watkins for 24 yards over the middle. Looking to force another field goal, the Packers got creative as the 15-yard touch pass to Jones went for a score to put the Packers in front for good 10-7.

Over the next several minutes, the teams combined for three possessions and three punts as they accounted for -24 yards of offense. A big reason for that was the pressure the Bears and Packers were able to bring, with Robert Quinn coming up with a huge sack and Preston Smith grabbing one for Green Bay.

With a chance to put some distance between them and the Bears heading into the half, the Packers got the ball back and immediately went to their short passing game. Mixing that with Jones and Dillon's running duo and the Bears had no answers as Jones caught his second touchdown pass of the half to make things 17-7.

Green Bay wasn't quite finished as their defense continued to make life miserable for Chicago as a great play from Rashaun Gary helped force another punt and gave the ball back to Rodgers again. What started with a nice run from Jones saw the Packers move the ball into Bears territory with Rodgers hooking up with Randell Cobb inside the red zone. Two plays later, it was Rodgers coming away with his third TD of the first half as Allan Lazard hauled in a five-yard strike to give Green Bay a 24-7 lead at the half.

Clearly not the half the Bears were hoping for, there were still another 30 minutes to be played, but after punting on their opening possession and watching the Packers move down the field, it wasn't looking great. That was until Rodgers fumbled inside the Bears 30, where former Packer Mike Pennel fell on the ball and gave it back to the Bears offense.

From there, it was the Montgomery show as his legs moved the chains for the Bears offense and helped to bring the ball near midfield. Add in the 18-yard strike from Fields to Ryan Griffin, and the Bears were in Packers territory, but would have to settle for the 44-yard Cairo Santos field goal to make things 24-10. Despite that, that fumble seemed to be the momentum swing the Bears needed as their defense forced another punt anchored by a second Rodgers fumble which he recovered.

With the ball back in the hands of the offense and a chance to make this a one-score game, the Bears put together their best drive of the game by going 89 yards on 13 plays and chewing nearly seven minutes off the clock. Montgomery continued to be the reason why as his 28-yard run after the Smith sack brought the Bears into Packers territory.

Khalil Herbert added a 20-plus yard run on that drive as the ground game worked. It worked so well that the Bears didn't throw a single pass on that drive and yet had the ball inside the five. Looking to make something happen with his legs again, Fields tried to dive for the pylon, but was marked short and set up a fourth-down play.

This is where the game changed as a controversial shotgun call saw Fields get stuffed short of the goal line, and the promising drive by the Bears ended with no points. That would be the final time the Bears would be in Packers territory as Green Bay marched 89 yards down the field to set up a 28-yard Crosby field goal, while Jaire Alexander picked off Fields on the Bears final possession to seal the deal for the Packers 27-10 win.

It was not the result the Bears were hoping for, but take away the second quarter when the Packers put up 21 points, and Chicago played well enough, especially on defense, to win this game. With Fields struggling to pass the ball, St. Brown led the way with 39 yards receiving. Rodgers went 19-25 for 234 yards and two scores, with Jones accounting for 132 of the Packers 208 yards rushing.