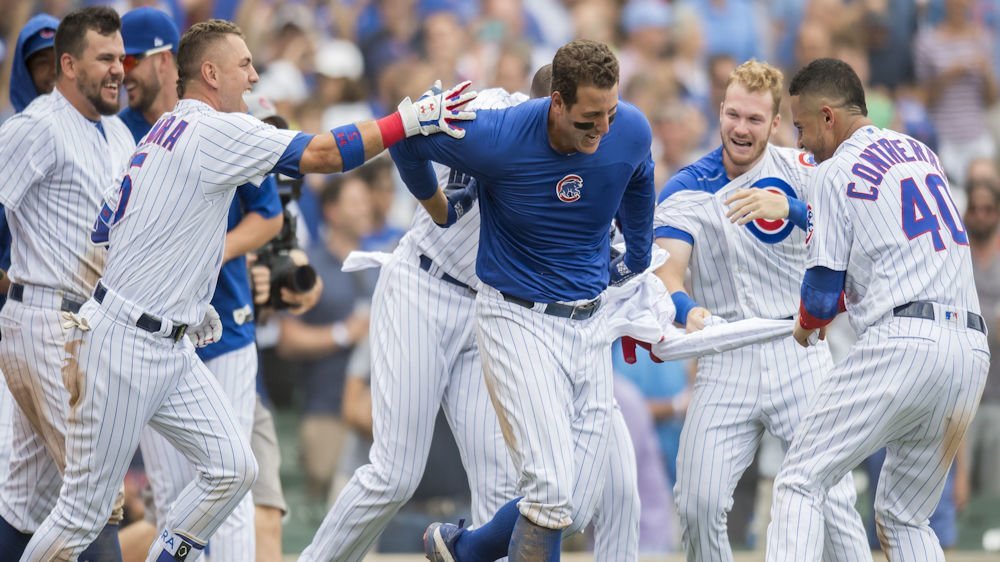 CHICAGO — With the most dramatic comeback of the Chicago Cubs' 2018 season, the North Siders overcame a 6-1 deficit and scored three runs on two homers in the ninth inning to walk off against the Arizona Diamondbacks. After youngster David Bote, who started in place of the banged-up Javier Baez at second base, crushed a two-run bomb in the bottom of the ninth, first baseman Anthony Rizzo stepped up to the plate and ended it with a solo blast over the wall in right field for his fourth career walk-off dinger and his first since 2014. Winning 7-6, the Cubs earned a series split in the four-gamer and improved to 60-42. As for the D-backs, they dropped to 56-48.

Despite eventually falling down by five runs, the Cubs led in the second inning. Catcher Willson Contreras stormed through a stop sign given to him by him third-base coach Brian Butterfield and motored from first to home for the opening run of the game on a single to right by Kyle Schwarber. Taking advantage of lethargic defense and a lobbed relay throw from the outfield, Contreras put the Cubs up 1-0 by way of heads-up base running.

The Diamondbacks then went on a 6-0 run, thanks to two home runs. First, former Cubs and current Diamondbacks catcher Alex Avila hit a two-run shot against Cubs starter Tyler Chatwood in the fourth. Later, after Chatwood exited with four runs in 4.2 innings charged to his name, Arizona shortstop Nick Ahmed cranked a grand slam against Brian Duensing to provide his club with a five-run lead.

The Cubs tacked on two runs in the fifth but also stranded two men. Rizzo, who went 3-5 in his 1,000th career game, accrued his first RBI of the day on a single to center. An ensuing error committed by Daniel Descalso at third base on an Albert Almora, Jr., at-bat led to the Cubs scoring their third run of the afternoon. Two straight groundouts after that left a pair of Cubs runners stranded.

Another defensive miscue by the D-backs benefited the Cubs in the sixth. Serving as pinch hitter, Baez reached first base on a swinging strikeout, as the third strike came on a wild pitch from Arizona starter Zack Godley that got away from Avila. The Cubs did not threaten to score in the seventh or the eighth, but their bats came alive against Diamondbacks reliever Brad Boxberger in the ninth.

Prior to the bottom of the ninth, Bote made several solid defensive plays in the field, including a diving stop on a hard-hit grounder in the second inning that prevented the D-backs from taking the lead. Then, in the final frame, Bote completed the five-run comeback by taking Boxberger to deep center on an 0-2 count for his second career big-league round-tripper. Bote, who went 2-4 at the dish, scored Ben Zobrist on the play, which came two at-bats after Zobrist drew a leadoff walk.

It didn't take long for David Bote to make an impact. #EverybodyIn pic.twitter.com/CJ0pWxWXHH

?? Certain as the sun
Rising in the east ?? pic.twitter.com/GXHJjwuLcd

With Boxberger rattled, Rizzo reaped the benefits by skying a 453-foot no-doubter into the bleachers beyond right-center field. It marked the first time that the Cubs have hit back-to-back home runs with the second one serving as a walk-off home run since Sammy Sosa and Moises Alou did so in 2004. Boxberger accrued the loss to fall to 1-4 on the year, and Cubs reliever Eddie Butler was credited with the win, making him 1-1. The Cubs have now come back to win after trailing by five or more runs three times this season, which is the most in the National League.