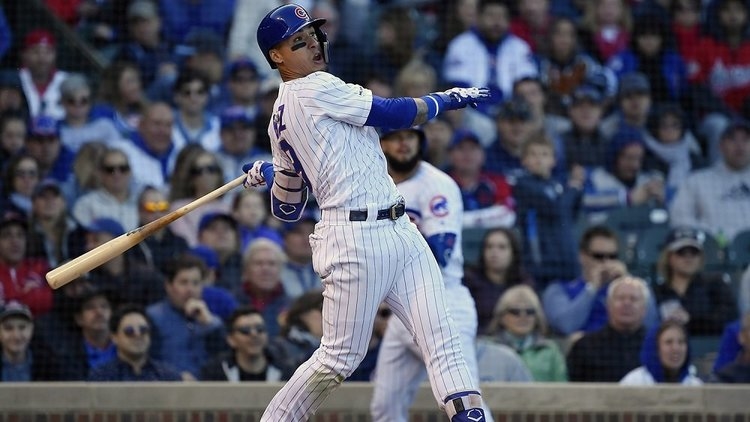 CHICAGO, Ill. — In a strange turn of events, a questionable ruling by the umpires that went against the Chicago Cubs (18-12) ended up working in their favor late in the North Siders' matchup against the St. Louis Cardinals (20-13) at Wrigley Field on Saturday. A few pitches after a controversial ruling on a foul ball, Cubs shortstop Javier Baez lifted a go-ahead home run that led to the Cubs topping the Cardinals by a final score of 6-5 for their sixth straight win.

The Cubs scored five of their six runs via a pair of homers on the afternoon, allowing them to overcome a shaky 4-inning start by Yu Darvish, in which the right-hander was taken for five runs on six hits and five walks. Cardinals hurler Michael Wacha put together a similar outing, as he gave up five runs on six hits and four walks in five innings of work. Wacha's start was hampered from the get-go by an error committed by former Cub Dexter Fowler, with the Cardinals center fielder badly misplaying a leadoff single by former Cardinal and current Cub Daniel Descalso to lead off the bottom of the first. Descalso scored soon afterward on RBI single off the bat of Kris Bryant.

After gunning down Bryant at third base to end the first frame, Cardinals right fielder Jose Martinez haunted the Cubs on the offensive end with a solo shot to center that began the second inning. Wacha, who went 2-for-2 while batting ninth on the day, led off the third with a double to left and was scored on an ensuing double by Matt Carpenter. Wacha and Carpenter came up with back-to-back RBI singles off Darvish in the top of the fourth, resulting in the Cardinals taking a 5-1 lead.

St. Louis' lead was neutralized with one swing of the bat in the bottom of the fourth, as Cubs catcher Taylor Davis picked the opportune time to hit the first home run of his big-league career. The 29-year-old perennial minor leaguer smashed a game-tying grand slam 416 feet to left off Wacha in the bottom of the fourth. Swinging at the first pitch of the at-bat, Davis, who was playing in his just fourth game of the season, tabbed his first-ever major-league blast. From there, a war of attrition featuring several clutch relief-pitching displays took place over the course of the next few innings, leading up to Baez's go-ahead round-tripper in the eighth.

A few pitches prior to going yard, Baez skied a popup down the right-field line that Cardinals second baseman Kolten Wong charged but was unable to catch while attempting a sliding grab. The ball was ruled foul after ricocheting off Wong's glove, but it appeared that Wong might have touched the baseball while it was directly above the line. The Cubs challenged the ruling, but the foul call stood. Baez made up for it by drilling a fastball delivered by Cardinals reliever John Brebbia 413 feet into the right-field bleachers for his 11th dinger of the season. Leading 6-5 at that point, the Cubs were able to hang on, with closer Pedro Strop going three up, three down in the ninth to finish off the 6-5 triumph and set up a potential sweep of the 3-game set on Sunday.

Javy in the clutch! pic.twitter.com/FEQLJgPxqv