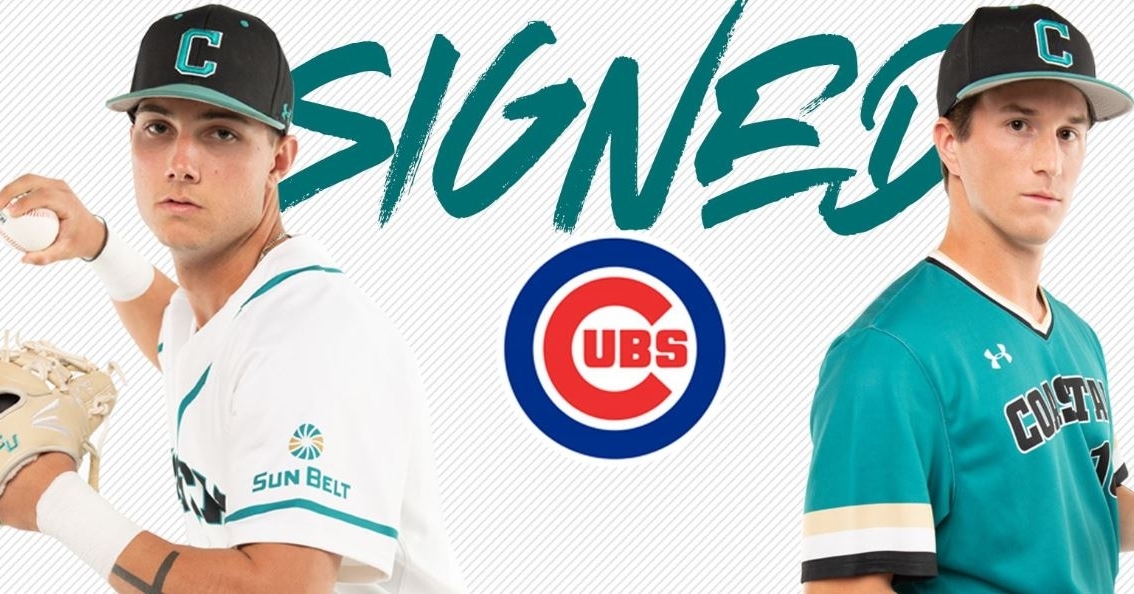 Scott McKeon signs with the Cubs 2020McKeon, who was drafted in the 21st round (622nd overall) by the Detroit Tigers in last year's 2019 Major League Baseball Draft, played and started in all 79 games at shortstop for the Chants over the last two years.

In his two years at CCU, McKeon hit .344 with a team-high 110 hits. He registered seven home runs, five triples, and 19 doubles while driving in 48 RBIs and scoring 69 runs. He posted a career slugging percentage of .500 and an on-base percentage of .407 while playing solid defense with a .929 fielding percentage at shortstop.

McKeon had a team-high eight multiple-hit games and posted a team-high six-game hitting streak on the season while reaching base safely in each of the last nine games in the shortened season. He was also a key part in the Chants totaling 22 double plays on the season, which was tied for second in all of NCAA DI baseball.

In his first year at CCU in 2019, McKeon played and started all 63 games at shortstop. He led the team and the Sun Belt in base hits with 87 on the season, which is tied for 18th all-time in CCU's single-season history. He hit .340, which was second on the team, with three home runs, a team-high five triples, 18 doubles, 39 RBIs, and 50 runs scored. The Raleigh, N.C. native, led the Chants with 28 multi-hit games, which included three double-digit hitting streaks on the season including a team-high 14-game hitting streak in March, and a season-ending 12-game hitting streak down the stretch of the season. He also registered 11 multi-RBI games and was a perfect 6-for-6 in stolen bases on the year.

Scott Kobos signed with Cubs 2020Kobos, who joined the Chants prior to the 2018 season as a junior college transfer, went a combined 4-5 overall with a 6.23 ERA over 23 appearances on the mound. He made 11 starts and recorded one save out of the bullpen. He struck out 61 batters and walked just 15 hitters over 60.2 innings on the bump for the Chanticleers.

Pitching at 100 percent for the first time since Tommy John surgery that ended his 2018 season early, Kobos made four starts in 2020, striking out 20 batters in 19.1 innings of work. He went 1-3 overall but lacked run support over his five appearances, as CCU scored just 12 runs while Kobos was on the mound, an average of 2.4 per outing. Outside of a rough outing versus Middle Tennessee (March 7), he allowed just four earned runs over 16.2 innings pitched, which included 6.0 innings versus San Diego (Feb. 15) and 5.0 against Illinois (Feb. 22).

Kobos, who was picked in the 38th round (1,152nd overall) by the Cleveland Indians in the 2017 Major League Baseball Draft, was a second-team All-Mid Florida Conference selection as a two-way player at St. Johns River State College in 2017 after playing as an outfielder as a true freshman at UNC Asheville in 2016.

Junior right-handed pitcher Zach McCambley was selected by the Miami Marlins in the third round as the 75th overall pick in the 2020 Major League Baseball Draft on June 11.

Couldn’t be more excited to begin my professional career with the Chicago Cubs! Words can’t express my gratitude to my teammates and coaches at Coastal Carolina for an incredible three years! Go Cubs! pic.twitter.com/jv6tJ4tJss

Another Chant to the @Cubs!
Congrats to @skoboz on signing an undrafted free agent deal with the team on the Northside!#ChantsUp pic.twitter.com/9FV3JCHTEq