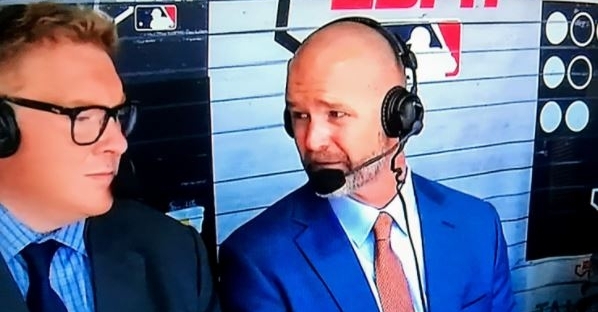 Boog should fit in well with the Cubs

Jon “Boog” Sciambi has been hired by Marquee Sports Network to replace Len Kasper as the lead play-by-play voice of the Chicago Cubs.

A lead headline of the Cubs’ offseason that has featured a non-tender of World Series hero Kyle Schwarber and a Yu Darvish/ Victor Caratini trade for four prospects and Zach Davies has been the departure of the play-by-play man of 16 seasons, Len Kasper, to become the radio play-by-play voice on the South Side of Chicago with the White Sox.

Kasper’s departure was announced in early December, so the Cubs took about a month to identify candidates to replace Kasper and become the next voice of the Chicago Cubs.

Beside Sciambi, Brian Anderson, Joe Davis, and Wayne Randazzo were among those rumored to be considered for the job — as well as Marquee Sports’ very own Chirs Myers.

Sciambi comes to Chicago after spending the last 10 seasons with ESPN full time as a baseball announcer, spending time on ESPN radio for Sunday Night Baseball, and on TV for Wednesday Night baseball.

Sciambi also spent parts of seasons from 1997-2004 with the Florida Marlins as their radio voice and the 2007-2009 seasons as the Atlanta Braves lead play-by-play announcer.

Aside from his national experience and known knowledge of the game, Sciambi does have multiple interesting connections to the Cubs. Part of the time Sciambi spent in Florida with the Marlins was when former Cubs announcer Len Kasper was also doing play-by-play for the Marlins.

The second of our two anecdotes is that Sciambi announced the Braves during David Ross’s first season playing for Atlanta. In addition to that, he called baseball games on ESPN during Ross’s stint with the major network.

Sciambi has also worked in the past with Rick Sutcliffe, who is featured on Marquee Network as well.

Marquee is in a difficult position. In a year with no fan revenue and the Cubs cutting payroll due to ownership’s financial losses — Marquee will rely heavily to generate money for the Ricketts family and the Cubs. Marquee had increased pressure to secure the next great Cubs TV announcer to add to Jack Brickhouse, Harry Caray, and Kasper.

The overall response and heartbeat of Cubs fans and baseball fans, in general, is that the Marquee hit a home run with the hire.

In a statement released by the Cubs and Marquee Network, it is said, “His personality, energy, and baseball credibility make him the perfect choice to succeed the legends who have preceded him.”

As someone who aspires to be an announcer, this hire was extremely intriguing to me.

The jury is still out on the nickname Boog, but Sciambi has a voice that is easy on the ears and has an energy that is contagious from the booth to the fans listening.

In addition to that, Sciambi brings a national background that is attractive to Marquee, aiming for a national feel.

My verdict: it’s never easy to be the guy who is compared to Brickhouse, Caray, and Kasper, but Boog is the right guy for the job.

Don’t believe us? Take it from Christian Yelich: