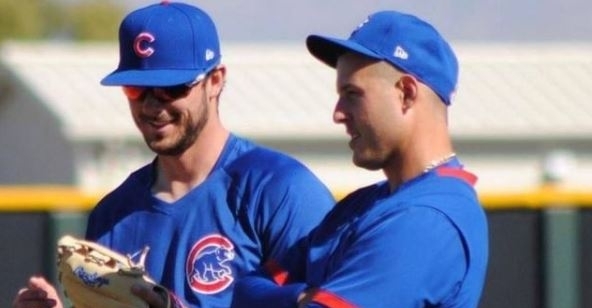 Let's get right to the Cubs notes!

Everybody looks to be all smiles as players get back to playing the game they love:

Smile if you're happy baseball is back! ?? pic.twitter.com/LPrHpvuRYK

To me, he looks a little bigger than last year:

Some more photos of Cubs players working out:

Anthony Rizzo was interviewed by Marquee Sports Network recently and talked about the upcoming 2021 season and how everyone is important for them to succeed:

Which player is the key to success in 2021?@MillerLite | https://t.co/t7BxcZez25 pic.twitter.com/cWFxhkXGyJ

Hoyer thinks that the Cubs are playing as an underdog this season, which should work well for the team.

Sometimes, being the underdog, there is less stress to be successful, so maybe this will work out for the Northsiders in 2021.

How do you feel about Jed Hoyer's comments from this morning as heard on @kapjhood? pic.twitter.com/IhxFuWpDx3

Everybody, including Anthony Rizzo, still has plenty of love for former Cubs star Jon Lester.

"Jon came over and just basically dusted off everyone's 'W' flag. And basically started waving the 'W' flag single-handedly for this franchise."

Rizzo doesn't think he will break out the cornrows during the season but might eventually get some hair extensions like Javy Baez did previously:

Anthony Rizzo on his new hair style during his trip to the Bahamas this off-season:

“It was fun, I said my endgame was to get cornrolled and twisted, got a really good scalp tan.” ?? #Cubs

Check out a preview of the premiere:

CubsHQ's Anthony Pasquale has the Cubs No. 14 in his first MLB power rankings of 2021. Where does everyone else have them ranked?

Check out this retro photo of Bruce Sutter wearing those powdered blue jerseys that look like one of my set of pajamas: