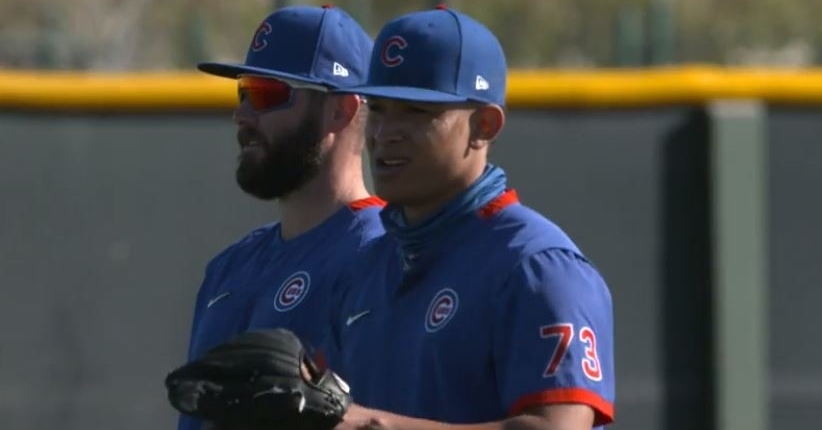 We will try to have this feature a few times a week, so everyone gets a summary of what is happening regularly at Cubs camp.

Check out a few photos showing Jake Arrieta as a mentor to young pitcher Adbert Alzolay during the early stages of spring training.

During Sunday's workout, @adbert29 is absorbing as much as he can from @JArrieta34 #SpringTraining pic.twitter.com/NZrN2uUsHI

Arrieta talks about Alzolay during his media session this past weekend:

“He's a guy who, from the get-go, I can tell that he wants it,” Jake Arrieta said of Adbert Alzolay.

Story on how Arrieta can influence Alzolay and other young Cubs pitchers, by @maddie_m_lee: https://t.co/igkYo3emKh pic.twitter.com/7QSi5Uk40j

Check out Arrieta back in 2014 and now in 2017. Doesn't look that different to me besides the jersey colors and a little more facial hair.

Hall of Famer Fergie Jenkins announced on social media that he got his second shot to prevent him from getting COVID-19.

Great news as Jenkins is truly a true Cubs ambassador for all ages and a great follow on Twitter!

2 for 2. Grab some bench COVID! pic.twitter.com/GYsMXMHMzR

The second base issue has been on the forefront of many Cubs fans this offseason as youngster Nico Hoerner will likely get a ton of reps without playing many games in the minors.

However, according to observers Sunday, Hoerner was raking, showing off some added power in his bat. Great sign for Nico and Cubs fans!

Nico Hoerner showing off some impressive pop during BP this morning.

He nearly hit one to the highway, off the top of the net by that pole on the far right. Next round, he hit one over the net and then cleared the scoreboard in left-center. pic.twitter.com/hKOz6PRngh

New Cubs announcer 'Boog' Scambi is over pitchers hitting in the National League.

I used to be a very old-school traditionalist on this issue, but I am warming up to the idea to watch more hitters hit and just let the pitchers throw. It seems like every year more pitchers are complaining about having to hit.

Don't miss this week's episode of Unwritten Rules with @BoogSciambi!

Javy Baez appeared to fall during Sunday's practice session while chasing a baseball in the gap as J-Hey looked on and smiled.

Fortunately for the Cubs, 'El Mago' was fine, and everyone had a good laugh about it. Great pics of the scene from Tony Andracki from Marquee Sports Network.

The Cubs are doing their 'Cubs UNconventional' event for the next few days with a lot of giveaways and promotions.

Check out a few printable Cubs coloring pics for the youngsters. OK, adults can do it too. :)

Have some fun with our kids coloring books!

Cuteness alert, as a few young Cubs fan, call a play where 'El Mago' steals home as part of the 'Cubs Unconventional' event.

Javy stealing home is better with kids on the call!#CubTogether pic.twitter.com/GiGyI88y2V

More cutness as a few kids ask the tough questions during a 'Kids only Press conference' to several Cubs players including catcher Willson Contreras:

The moment we've all been waiting for! https://t.co/en7NttovrS

Cubs outfielder Ian Happ has the chance to get even better in 2021 as a possible breakout player.

Tip -- Get him on your fantasy baseball team while he is still cheap.

Wrigley Field always looks beautiful but check it out all snow covered recently:

Lastly, check out a vintage picture of Hall of Famer Lee Smith. He was certainly a stud on the mound.